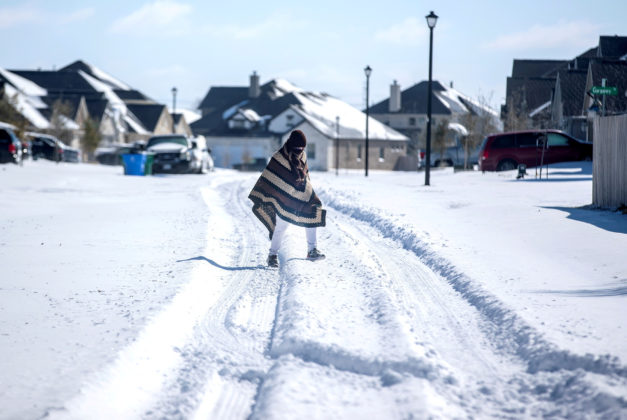 FILE PHOTO: A man walks to his friend's home in a neighbourhood without electricity as snow covers the BlackHawk neighborhood in Pflugerville, Texas, U.S. February 15, 2021. Bronte Wittpenn/Austin American-Statesman/USA Today Network via REUTERS//File Photo

(Reuters) – A deep freeze kept the Texas energy sector in the dark for a fifth day on Wednesday, with Houston’s major shipping channel closed overnight and at least a fifth of U.S. refining output offline.

About 500,000 to 1.2 million bpd of crude production has also been shut, including in the Permian, the largest U.S. oilfield, and it could be weeks before it is fully restored, industry analysts said.

The cold snap, which has killed 21 people and knocked out power to millions of people in Texas is not expected to let up until this weekend.

Electricity prices in Texas continued to surge, as utilities scrambled to meet heating demand. Next-day power for Wednesday at the ERCOT North hub, which includes the cities of Dallas and Fort Worth, spiked to a record of $8,800 per MWh, a nearly six-fold jump from $1,490 on Tuesday.

Texas produces more oil and natural gas than any other U.S. state, and its operators, unlike those in North Dakota or Alaska, are not used to dealing with frigid temperatures.

“A production rebound could potentially take more than a week or two for the majority of oil and gas wells, but it might take longer for production from nearly all wells to recover,” analysts at Citigroup wrote.

The Houston Ship Channel, which had opened for some vessel traffic during Tuesday, was shut again overnight. The 53-mile (85 km) waterway crucial to oil and fuel exports, has been closed since Feb. 14.

“We have 4 delayed incoming vessels, which is not much. The shipping channel is not operating at night time due to weather hazards and we are planning to open the channel in another 3 hours from now. Last night we had one order cancellation due to the weather,” a Houston Pilots dispatcher said.

The supply disruptions drove further gains in oil prices on Wednesday, although U.S. natural gas prices eased after rising more than 10% on Tuesday.

The state’s power grid operator, the Electric Reliability Council of Texas (ERCOT), which had instituted rolling blackouts as demand overwhelmed generation, on Wednesday said it had directed utilities to restore power to 600,000 households last night, with 2.7 million still experiencing an outage.

Nearly 4 million barrels per day of refining capacity has been knocked out, Reuters calculations found.

The cold has shut natural gas production and pipelines, which refineries use in power generation. Widespread power outages or instability of external power supply can force shutdowns.

Apart from the refinery shutdowns in Texas, including the nation’s largest, Motiva’s 600,000 bpd Port Arthur facility, Citgo Petroleum Corp said it was continuing to run its 418,000 barrel-per-day Lake Charles plant in Louisiana at reduced rates.

(Reporting by Arpan Varghese and Diptendu Lahiri in Bengaluru; Editing by Barbara Lewis)