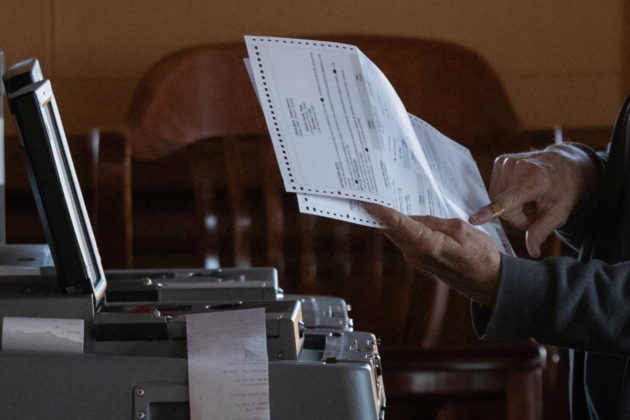 FILE PHOTO: An election official points towards a mail in ballot while scanning votes for the 2020 U.S. presidential election in Marfa, Texas, U.S., November 3, 2020. REUTERS/Adrees Latif

By Joseph Ax and Steve Gorman

(Reuters) -Texas joined other Republican-controlled states on Friday in advancing a slew of new voting restrictions, defying opposition from many of the state’s businesses and adding to a fierce national debate over voting rights.

The state House of Representatives in Austin gave the legislation preliminary approval at 3 a.m. CDT (0800 GMT) on Friday after hours of debate before delivering final approval around 2:45 p.m. (1945 GMT), largely along party lines.

Members of the House and the state Senate, which passed its own bill imposing voting limits last month, will now work to reconcile the two bills before sending a finalized version to Republican Governor Greg Abbott, who has indicated he will sign it.

The Texas House bill gives more access to partisan poll watchers and bars election officials from sending unsolicited mail-in ballot applications to voters, among other restrictions. The Senate bill includes limits on early voting and would prohibit 24-hour polling sites and drive-through voting, both changes that Harris County made last year during the coronavirus pandemic.

Sponsors of the bills said they are intended to prevent voter fraud while bolstering election integrity and public confidence in balloting.

“This bill is about protecting voters,” Republican Representative Briscoe Cain said during the House floor debate.

Democrats and civil rights groups counter that there is no evidence of widespread ballot tampering, and argue that such legislation disproportionately burdens or discourages voters of color, as well as the elderly and disabled. Voting rights advocates say Texas already has in place some of the highest barriers to voting of any state.

“In short, this bill is nothing but voter suppression,” Jasmine Crockett, a lawyer and first-term Democrat, said on the House floor.

Voting by mail, and early voting in general, surged during the 2020 election as voters sought to avoid ballot-box queues in the midst of the pandemic.

The Texas vote came a day after Florida’s Republican governor, Ron DeSantis, signed a new law making it more difficult for voters to cast ballots by mail or to use ballot drop boxes.

More than three months after Biden was sworn in, Trump has continued to assert that the election was stolen. Courts have rejected those claims in more than 60 lawsuits challenging the results.