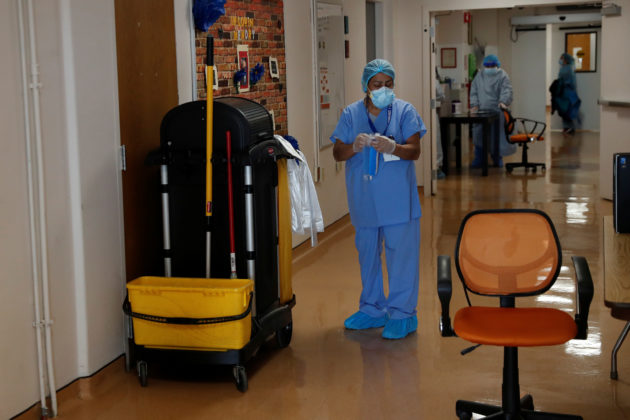 Evelia De La Cruz, a hospital housekeeper at Roseland Community Hospital, looks down before cleaning at the hospital on the South Side of Chicago, December 4, 2020. REUTERS/Shannon Stapleton

CHICAGO (Reuters) – When hospital cleaner Evelia De La Cruz was assigned to the COVID-19 ward in March, she was afraid.

A 60-year-old immigrant from the southern coast of Mexico, De La Cruz was tasked with stripping sheets and sanitizing beds as first a handful, and then a deluge, of coronavirus patients brought infection to her Chicago hospital.

“I prayed for God to give me the courage,” she said.

Some of De La Cruz’s colleagues refused to work the COVID-19 wards, she said, leaving the hospital understaffed. She has been laboring seven days a week, at times for weeks on end.

“Every day I went to work, even on my days off, because I know that the patients need me, the hospital and the country needs me,” she said.

Throughout the northern hemisphere spring, as the coronavirus ravaged through international cities, residents of Rome, Madrid, New York City and beyond took to their balconies to applaud frontline medical workers who, often overlooked in non-pandemic years, had become symbols of sacrifice in terrifying times.

Ten months and over a million and a half global deaths later, nurses and doctors continue to risk their lives every day as they report to the hospitals.

Yet, their ability to work has relied on a less visible category of frontline staff: cleaners and janitors like De La Cruz.

In the United States, many are immigrants from Latin America, a population already hard-hit by the pandemic.

Since the outbreak began, the only time De La Cruz took more than the occasional day off was in July, when she herself was infected with the virus.

After a month-long recovery, she returned to disinfecting the coronavirus-contaminated areas of the hospital.

She keeps a vase filled with fresh flowers in her home, where she prays for the health of her family and for an end to the pandemic.

“I’m proud to serve the sick and this country,” said De La Cruz, who has lived in the United States for three decades.

Her neighbors sometimes stop to thank her, she said.