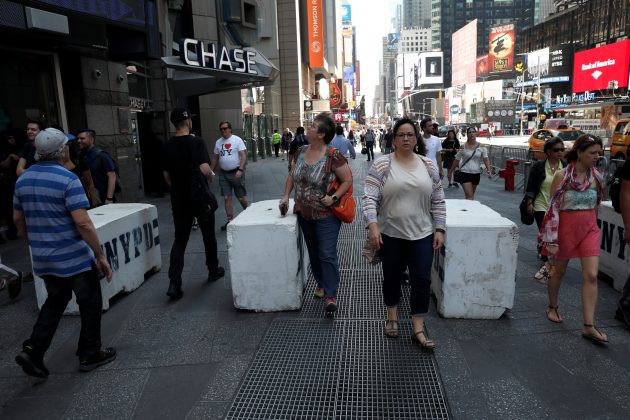 By Jonathan Allen and Gina Cherelus

NEW YORK (Reuters) – Three people remained in critical condition on Friday after a driver plowed into pedestrians in New York City’s Times Square the day before, killing a young woman on vacation and injuring her sister and 19 others, police said.

Richard Rojas, the 26-year-old motorist, accelerated as he turned onto the sidewalk and appeared to have intentionally tried to mow down pedestrians, Mayor Bill de Blasio and police said. He is due in court in Manhattan later on Friday to face charges of murder, attempted murder and vehicular homicide.

Rojas, who had served in the U.S. Navy, has prior convictions for drunk driving. Police said he was intoxicated as he knocked pedestrians into the air while speeding for three blocks in his burgundy Honda sedan through one of the city’s busiest areas. The car crashed into a metal stanchion.

“People are being dragged, they’re on top of the car,” Bill Aubry, a New York Police Department assistant chief, told a news conference on Friday.

“He left his house at 10:30 yesterday morning, and at 11:54 he came to Times Square,” Aubry said. “There were no incidents in between. That goes to his state of mind. He waited for these cars to pass, and he accelerated.”

Results of drug tests on Rojas are expected in the next few days, Aubry said.

City officials do not consider the incident an act of terrorism, de Blasio said.

“It appears to be intentional in the sense that he was troubled and lashing out,” the mayor said in an interview with radio station WNYC. He said Rojas had “an untreated mental health issue going back probably decades.”

Police said the young woman killed on the sidewalk was Alyssa Elsman, 18, who was on vacation with her family from Michigan. People were leaving flowers, photographs of Elsman and a stuffed teddy bear on Friday near the spot where she died.

The fire department said earlier that 22 people were injured, but police on Friday said the number was 20.

Rojas, who lives with his mother in New York City’s Bronx borough, had been arrested twice for drunken driving, in 2008 and 2015, and once this month on a charge of menacing for threatening another man with a knife, police said.

Although only one person was killed, a driver can face multiple counts of vehicular homicide under New York law if other people are seriously injured. It was unclear if Rojas has a lawyer.

Navy records show Rojas enlisted in September 2011 and was based in Illinois and Florida, working as an electrician’s mate fireman apprentice.

He was arrested a year later at a naval base in Jacksonville, Florida, where officials said he attacked a cab driver, shouted “my life is over,” and threatened to kill police, according to court records. Rojas was charged at the time with misdemeanor battery and resisting an officer without violence, but it was unclear how the case was resolved.

He spent two months in a military prison in Charleston, South Carolina, in the summer of 2013, but the Navy records did not say why. He left the Navy in May 2014.