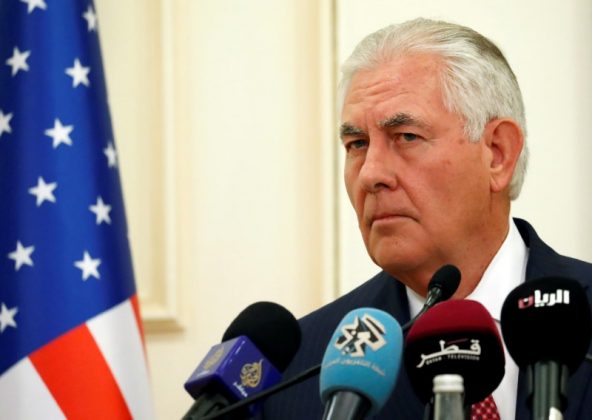 BAGHDAD (Reuters) – U.S. Secretary of State Rex Tillerson arrived on Monday in Iraq, hours after the government rebuked him for calling on it to send home Iranian-backed paramilitary units that helped defeat Islamic State and capture the Kurdish-held city of Kirkuk.

Iraq is one of the few countries allied closely to both the United States and Iran, and Tillerson’s effort to drive a wedge between Baghdad and Tehran appeared to have backfired, drawing a sharp statement from Prime Minister Haidar Abadi’s office.

Tillerson visited Iraq a day after a rare joint meeting with Abadi and Saudi Arabia’s king Salman in the kingdom’s capital Riyadh.

After that meeting he called on Iraq to halt the work of the Tehran-backed paramilitary units, which have operated alongside government troops in battles against Islamic State and, since last week, in a lightning advance that seized the oil city of Kirkuk from Kurdish security forces.

Iraqi forces are deploying tanks and artillery just south of a Kurdish-operated oil pipeline that crosses into Turkey, a Kurdish security official said, the latest in a series of Iranian-backed operations against the Kurds.

“Iranian militias that are in Iraq, now that the fight against Daesh and ISIS is coming to a close, those militias need to go home,” Tillerson said on Sunday in Saudi Arabia.

“No party has the right to interfere in Iraqi matters,” a statement from his office read. It did not cite the prime minister himself but a “source” close to him. It referred to the mainly Shi’ite paramilitaries, known as “Popular Mobilization”, as “patriots”.

The international battle against Islamic State fighters in northern Iraq since 2014 saw the United States and Iran effectively fighting on the same side, with both supporting the Iraqi government against the militants.

Washington has 5,000 troops in Iraq, and provided air support, training and weapons to Iraqi government forces, even as Iran armed, trained and advised Shi’ite paramilitaries which often fought alongside the army.

Iran is the pre-eminent Shi’ite power in the Middle East. Shi’ites, including Abadi, are the majority in Iraq which also has large Sunni Arab and Kurdish communities.

Iran exhibited its sway over Baghdad’s policies during tensions over a referendum last month in which the semi-autonomous Kurdistan region voted to secede from Iraq against Baghdad’s wishes, Kurdish officials say.

Baghdad responded to the vote by seizing the oil city of Kirkuk, which the Kurds see as the heart of any future homeland.

Iran’s Foreign Minister Mohammad Javad Zarif dismissed Tillerson’s remarks. The paramilitaries could not go home because “they are at home” already, he was quoted as saying by the state news agency IRNA.

Abadi has asserted his authority with the defeat of Islamic State in Mosul and the Iraqi army’s sweep through Kirkuk and other areas which were held by the Kurds.

The buildup at the Kurdish oil export pipeline is taking place northwest of Mosul, an official from the Kurdistan Regional Government’s (KRG) security council said.

The loss of Kirkuk dealt a major blow to the Kurds, who had been steadily building an autonomous region in northern Iraq since a U.S.-led invasion toppled Saddam Hussein, who oppressed them for decades.

Elections for Iraq’s Kurdistan region’s presidency and parliament set for Nov. 1 will be delayed because political parties failed to present candidates, the head of the electoral commission Hendrean Mohammed told Reuters.

Parties have been unable to focus on the elections because

of turmoil that followed the referendum, a Kurdish lawmaker said on condition of anonymity.