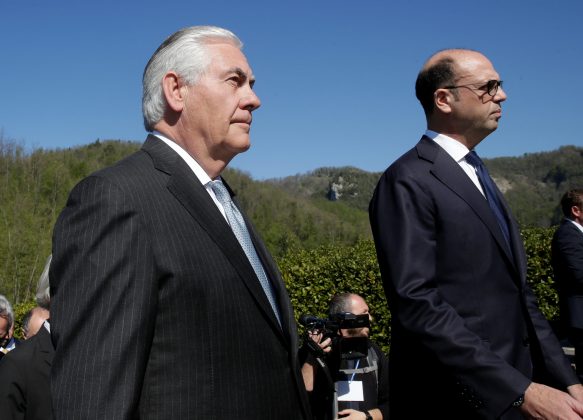 U.S. Secretary of State Rex Tillerson (L) and Italy's Foreign Minister Angelino Alfano arrive to attend a ceremony at the Sant'Anna di Stazzema memorial, dedicated to the victims of the massacre committed in the village of Sant'Anna di Stazzema by Nazis in 1944 during World War II, Italy April 10, 2017. REUTERS/Max Rossi

By Lesley Wroughton and Yeganeh Torbati

WASHINGTON (Reuters) – U.S. Secretary of State Rex Tillerson’s visit to Moscow this week will be an early test of whether the Trump administration can use any momentum generated by a missile attack on a Syrian air base to craft and execute a strategy to end the Syrian war.

Even before Trump ordered last week’s strike in retaliation for a nerve gas attack, Tillerson’s visit was certain to be dominated by thorny issues, including Russian interference in the 2016 U.S. election, an apparent violation of an important arms control treaty, and seeing what cooperation, if any, is possible in the fight against Islamic State.

Now, Tillerson, a former oil executive with no diplomatic experience, is charged with avoiding a major U.S. confrontation with Russia while exacting some concessions from Moscow. Those include getting rid of Syrian President Bashar al-Assad’s remaining chemical weapons and pressing Assad to negotiate Syria’s future.

The Kremlin said on Monday Tillerson was not scheduled to meet with Russian President Vladimir Putin during his visit, a move that could point to tensions.

It may also suggest that Tillerson will instead follow strict diplomatic protocol and only meet his direct counterpart, Russian Foreign Minister Sergei Lavrov. The State Department said last week a meeting had not been confirmed with Putin, who met with Tillerson when the Texan headed Exxon Mobil.

Russia, along with Iran, is Assad’s primary backer, and its intervention in Syria’s war has been crucial to ensuring his grip on power, although no longer over the entire country.

Tillerson said he had not seen hard evidence that Russia knew ahead of time about the chemical weapons attack, which killed at least 70 people, but he planned to urge Moscow to rethink its support for Assad in the April 12 talks.

“I’m hopeful that we can have constructive talks with the Russian government, with Foreign Minister Lavrov and have Russia be supportive of a process that will lead to a stable Syria,” Tillerson told ABC’s “The Week” on Sunday.

“The demonstration of the administration’s willingness to use force has the potential to add some leverage to the diplomacy,” said Antony Blinken, a deputy to former Secretary of State John Kerry.

The U.S. strike – ordered less than three days after the gas attack – could make it clear to Russia that the United States will hold Moscow accountable for Assad, Blinken said.

Tillerson ought to be “very matter of fact” in his meetings, Blinken said, sending Russia a message that: “If you don’t rein him in, we will take further action.”

Tillerson said on Thursday that Russia had “failed in its responsibility” to remove Syria’s chemical weapons under a 2013 agreement, which he argued showed Russia was either complicit with the gas attacks or “simply incompetent.” Securing a Russian commitment on eliminating Assad’s chemical weapons is likely to be first on his agenda, said Evelyn Farkas, a former deputy assistant secretary of defense in the Obama administration.

The talks will be a major test of Tillerson’s diplomatic skills. As a former chief executive at Exxon Mobil, he has experience doing business in Russia, but no background in the often public negotiations that international diplomacy requires.

It also is unclear if Trump, who has expressed skepticism about multilateral institutions such as the European Union and United Nations, will have patience for the protracted negotiations that a comprehensive deal on Syria would require.

Russia condemned the missile strike as illegal and Putin said it would harm U.S.-Russia ties. Moscow also said it would keep military channels of communication open with Washington, but would not exchange any information through them.

It was an unforeseen turn of events for Trump, who praised Putin repeatedly during last year’s election campaign and said he would like to work more closely with Russia to defeat Islamic State. Just over a week ago, top administration officials were signaling that removing Assad is no longer a U.S. priority.

But one senior official said it was significant that Russia suspended, and did not cancel, cooperation with the United States after the air strike. Nor did Lavrov cancel Tillerson’s visit to Moscow, suggesting Russia may be willing to tolerate the single strike. As of this weekend, the talks were still on.

“They’re going to try to draw a line around this incident,” said Alexander Vershbow, a former U.S. ambassador to Russia during the George W. Bush administration. “They are still not giving up on working with the Trump administration.”

The Trump administration also wants to keep the focus in Syria on defeating Islamic State rather than opening a conflict with Russia or Syria’s government.

Another U.S. official said one hope is that Moscow will see Tillerson’s visit and a discussion about how to cooperate to stop Assad’s use of banned weapons as a tacit acknowledgement of Russia’s great power status, one of Putin’s main ambitions.

“The strikes aren’t necessarily a bad thing for Russia,” said Andrew Tabler, a fellow with the Washington Institute for Near East Policy. “Russia’s had a very hard time getting President Assad to come to the negotiating table in any kind of meaningful way.”

Now, Tabler said, the Russians can point to more U.S. strikes as the price of further intransigence by Assad.