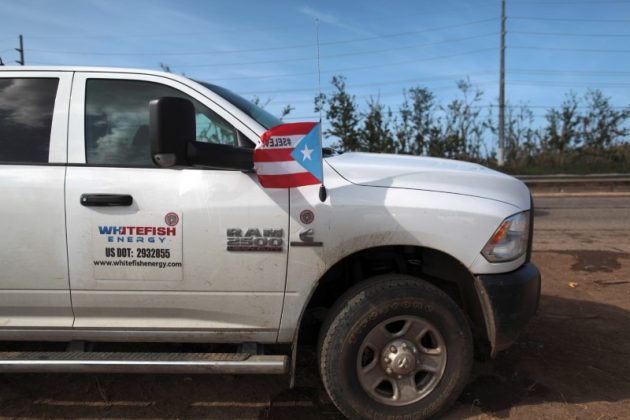 A pick up from Montana-based Whitefish Energy Holdings is parked as workers (not pictured) help fix the island's power grid, damaged during Hurricane Maria in September, in Manati, Puerto Rico October 25, 2017. REUTERS/Alvin Baez

WASHINGTON/NEW YORK (Reuters) – Federal emergency officials raised “significant concerns” on Friday about a $300 million contract between Puerto Rico’s storm-hit power utility and a tiny Montana firm, as Democratic lawmakers stepped up calls for an investigation of the deal.

The Federal Emergency Management Agency said in a statement that after its initial review it “has not confirmed whether the contract prices are reasonable” under the agreement between Puerto Rico Electric Power Authority and Whitefish Energy Holdings, a two-year-old firm with just two full-time employees.

The contract between PREPA and Whitefish was awarded without a competitive bidding process.

Whitefish spokesman Ken Luce said the deal was secured when its chief executive and co-owner, Andy Techmanski, flew to Puerto Rico on Sept. 26, six days after Hurricane Maria tore into the bankrupt U.S. territory and knocked out power to all 3.4 million residents.

The contract, and the slow restoration of power on the island, has raised questions about who is effectively managing PREPA’s response to the hurricane, as about 75 percent of homes and businesses still lack electricity after several weeks.

Jose Roman, interim chairman of Puerto Rico’s Energy Commission, said the commission is looking into how Whitefish got the contract as part of a larger investigation to “determine the prudence of the actions of PREPA; not just the Whitefish contract,” he said.

Puerto Rico’s financial oversight board earlier this week said it would appoint an emergency manager to oversee PREPA, though that has met with pushback from Governor Ricardo Rossello, who may challenge such an effort in court.

It took more than a week after Maria hit the island for a damage assessment to be completed by PREPA, the chronically underfunded state utility. Eventually, FEMA put the U.S. Army Corps of Engineers in charge of short-term power restoration.

ZINKE: I HAD “NOTHING TO DO” WITH CONTRACT

A growing number of U.S. lawmakers have raised questions about the contract, the slow pace of power restoration, and Interior Secretary Ryan Zinke’s connections with Whitefish.

The representatives noted that Whitefish is based in Zinke’s hometown and that Zinke’s son once worked for Whitefish. The letter also stated that a Whitefish financial backer, HBC Investments, was founded by Joe Colonnetta, a contributor to President Donald Trump’s campaign, as well as “many other Republican candidates.”

Zinke said in a release that “I had absolutely nothing to do with Whitefish Energy receiving a contract in Puerto Rico.” After the initial contract was awarded, “I was contacted by the company, on which I took no action,” he said.

White House spokesman Raj Shah said that the administration’s “understanding” was that the contract was awarded solely by PREPA, and they are “not aware of any federal involvement” in the deal.

U.S. Senate Democrats urged FEMA and the U.S. Army Corps of Engineers in a letter to unify efforts to restore power on the island.

They also called on FEMA and PREPA to name a top official to oversee all electrical contracts, and urged federal officials to more quickly clear crews from two companies, Fluor Corp &lt;FLR.N&gt; and PowerSecure, so they can begin restoration work.

Several utilities are involved in restoration, including Fluor, Whitefish, JEA, New York Power Authority, and others. Whitefish and its subcontractors have more than 300 people on the island, Luce said.

Techmanski first got in touch with PREPA following Hurricane Irma, during a bidding process to repair damages from that storm, which hit Puerto Rico two weeks before Maria, Luce said.

“In no event shall PREPA, the Commonwealth of Puerto Rico, the FEMA administrator, the Comptroller General of the United States or any other authorized representatives have the right to audit or review the cost and profit elements,” said the document, published by several media outlets, whose authenticity was confirmed by Democratic staffers for the Natural Resources Committee.

House Democratic Leader Nancy Pelosi called for the immediate termination of the contract, saying “no federally-funded contract should be immune from routine oversight or circumvent a federal audit.”

Costs listed for hourly wages ranged in the hundreds of dollars and daily per diems of more than $330 for accommodations and nearly $80 for food, according to the “bid schedule” published online. The document put the cost of one-way airline flights for employees at $1,000.

Luce defended the deal, saying the company welcomed an audit or questions from Washington. “The contract was done in good faith with PREPA,” he said.

Rossello has also defended the contract, even as he ordered an audit. Initial results of the audit are expected to be released later on Friday, according to NBC News.