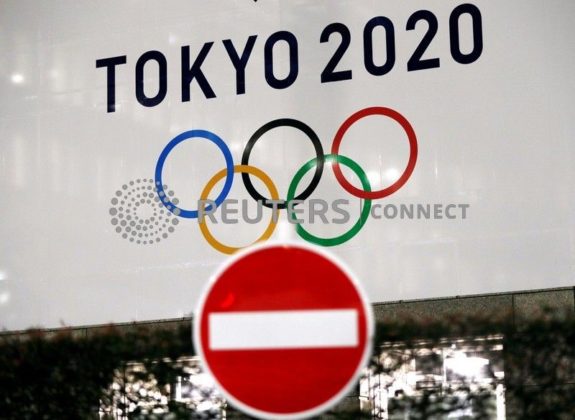 A banner for the upcoming Tokyo 2020 Olympics is seen behind a traffic sign, following an outbreak of the coronavirus disease (COVID-19), in Tokyo, Japan, March 23, 2020. REUTERS/Issei Kato

By Steve Keating and Leika Kihara

TORONTO/TOKYO (Reuters) – Major sporting nations Australia and Canada withdrew from the Tokyo 2020 Olympics on Monday as organizers faced global pressure to postpone the Games due to the coronavirus crisis for the first time in their 124-year modern history.

Putting back the July 24-Aug. 9 event, as is looking inevitable, would be a massive blow for host Japan which has pumped in more than $12 billion of investment.

Huge sums are also at stake for sponsors and broadcasters.

But a groundswell of concern from athletes – already struggling to train as gyms, stadiums and swimming pools close around the world – appears to be tipping the balance, along with the cancellation of other major sports events.

The International Olympic Committee (IOC) and Japanese government have both edged back from weeks of blanket insistence the Games would go ahead, announcing a month-long consultation over other scenarios including postponement.

The Olympics have never before been delayed, though they were canceled altogether in 1916, 1940 and 1944 during the World Wars, and major Cold War boycotts disrupted the Moscow and Los Angeles Games in 1980 and 1984 respectively.

“The moment the IOC indicates that it is thinking about other solutions, it has already decided to delay the Games,” said French Olympic Committee president Denis Masseglia.

Canada and Australia both bluntly said they would not participate if the Games were not put back to 2021 and Britain may follow suit.

“Our athletes have been magnificent in their positive attitude to training and preparing, but the stress and uncertainty have been extremely challenging for them,” said Australia’s Olympics Chef de Mission, Ian Chesterman.

Paralympic athletes were considered at particular risk from the epidemic given some had underlying health problems. More than 14,600 people have died globally from the coronavirus.

But a raft of other nations and sports bodies piled pressure on the IOC – and its powerful president Thomas Bach, a former Olympic fencing champion – to make a quick decision on postponement.

“The faster the decision the better it is for the entire Olympic movement,” Greece’s Olympic head, Spyros Capralos, a former water polo player, told Reuters.

“I understand where the athletes are coming from … When you cannot train you are stressed, you live in agony which is disastrous. Postponement is inevitable.”

Athletes were sad but broadly supportive of a delay.

“The right choice was made, but it doesn’t make it any easier,” said Canadian world champion swimmer Maggie MacNeil, who was hoping to make her Olympic debut in Tokyo.

ABE AND BACH UNDER PRESSURE

Japanese authorities seemed to be bowing to the inevitable despite the losses and logistics headaches it would entail.

“We may have no option but to consider postponing,” Prime Minister Shinzo Abe, who was hoping for a boom in tourism and consumer spending, told parliament.

The organizing committee was already scaling back the torch relay to avoid crowds, NHK broadcaster said.

Both Japan and the IOC have stressed that calling off the Games entirely is not an option.

But finding a new date could be complicated as the summer 2021 calendar is already crowded, while 2022 will see the soccer World Cup and the Beijing Winter Olympics.

Japanese sponsors, from Toyota Motor Corp to Panasonic Corp, were nervously watching. But Tokyo stocks sensitive to the success of the Olympics surged on Monday, after sharp falls in prior weeks, thanks to expectations of a delay rather than a cancellation.

Postponement could be a major blow to the IOC’s prestige after weeks of saying the Games would go ahead as planned.

Many athletes already felt disrespected during the Russian doping scandal when Bach ensured Russians could carry on competing, albeit as neutrals. Now his strong grip on the IOC could weaken after various national committees distanced themselves from his stance over Tokyo.

Global Athlete Group said the IOC’s planned, month-long consultation was irresponsible. “Over the next four weeks the world is going to increasingly shut down, the COVID-19 virus will sadly take more lives, and without a clear answer, athletes are still being indirectly asked to train,” it said.