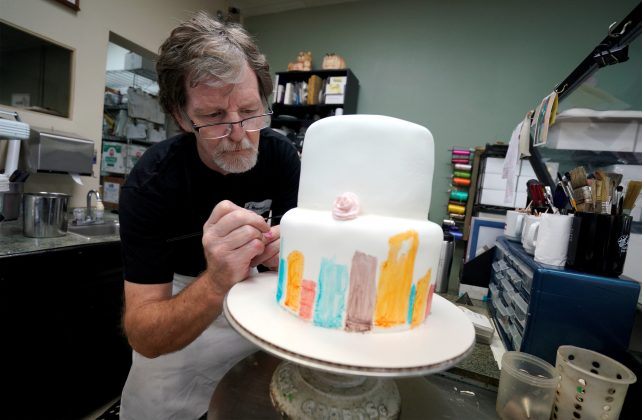 WASHINGTON (Reuters) – The U.S. Supreme Court on Tuesday began hearing arguments in a major case on whether certain businesses can refuse service to gay couples if they oppose same-sex marriage on religious grounds in a dispute involving a conservative Christian baker in Colorado who declined to make a wedding cake for two men.

The nine justices opened a scheduled hour of arguments in an appeal brought by Jack Phillips, a baker who runs Masterpiece Cakeshop in the Denver suburb of Lakewood, of a state court ruling that his refusal violated a Colorado anti-discrimination law.

In one of the biggest cases of the conservative-majority court’s nine-month term, the justices must decide whether the baker’s action was constitutionally protected, meaning he can avoid punishment under the Colorado law.

Phillips contends that law violated his rights to freedom of speech and free exercise of religion under the U.S. Constitution’s First Amendment. The Supreme Court arguments will focus on his free speech claim, based on the idea that creating a custom cake is a form of free expression.

The couple, David Mullins and Charlie Craig, call the baker’s refusal a simple case of unlawful discrimination based on sexual orientation.

The Supreme Court legalized gay marriage in a landmark 2015 ruling written by Justice Anthony Kennedy, one of the court’s five conservatives. The 81-year-old Kennedy, who has joined the court’s four liberals in major decisions on issues such as abortion and gay rights, could cast the deciding vote. Kennedy also is a strong proponent of free speech rights.

A ruling favoring Phillips could open the door for businesses that offer creative services to spurn gay couples by invoking religious beliefs, as some wedding photographers, florists and others already have done. Conservatives have filed other lawsuits also seeking to limit the reach of the 2015 gay marriage ruling.

Hundreds of demonstrators on both sides of the dispute rallied outside the white marble courthouse. Supporters of Phillips waved signs that read, “We got your back Jack.” As Mullins and Craig made their way into the courthouse, the two men led their supporters in chants of “Love Wins.”

The case highlights tensions between gay rights proponents and conservative Christians who oppose same-sex marriage, as illustrated in comments made by demonstrators on Tuesday.

“Religious liberty is the most important right we have been given in the Constitution, and this case exemplifies it,” said Paula Oas, 64, a Maryland resident. “I believe Jack is not harming others.”

Sherrill Fields, 67, a lesbian Virginia resident, said she feared that if the court sides with the baker, different types of businesses will turn away gay customers.

“This kind of thing will come out of the woodwork,” Fields said. “People and businesses of all sorts will deny us service. Restaurants, hairdressers, doctors, tow truck drivers, anybody that provides a service.”

The legal fight broke out in 2012 when Phillips told Mullins and Craig that due to his Christian beliefs he would not be able to make a cake to celebrate their wedding.

The two men married in Massachusetts but wanted to celebrate their nuptials with friends in Colorado. At the time, Colorado allowed civil unions but not marriage between same-sex couples.

The couple turned to the American Civil Liberties Union, which filed a complaint on their behalf, saying Phillips had violated Colorado state law barring businesses from refusing service based on race, sex, marital status or sexual orientation.

The Colorado Civil Rights Commission found that Phillips had violated the law and ordered him to take remedial measures including staff training and the filing of quarterly compliance reports. In August 2015, the Colorado Court of Appeals also ruled against Phillips.

The Colorado Supreme Court refused to hear the case, prompting Phillips to appeals to the U.S. Supreme Court.

The ACLU said Phillips’ legal team at the conservative Christian group Alliance Defending Freedom is advocating for a “license to discriminate” that could have broad repercussions beyond gay rights.

“I can’t emphasize enough how far sweeping the argument is both in terms of what it is saying about the Constitution and who will be affected,” ACLU lawyer Louise Melling said.

Phillips’ lawyers said creative professionals should not be forced to engage in expression that goes against their conscience.

“If the court were to say it could force someone like Jack … to be coerced, then it has the power to force anyone of us to speak those same messages and to violate our convictions,” Phillips’ attorney Kristen Waggoner said.