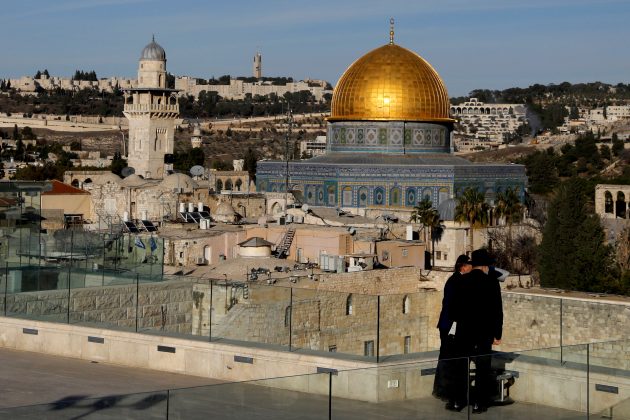 A general view shows the Dome of the Rock and Jerusalem's Old City December 4, 2017. REUTERS/Ronen Zvulun

By Ercan Gurses and Arshad Mohammed

Senior U.S. officials told Reuters some officers in the State Department were also deeply concerned and the European Union, the Palestinian Authority, Saudi Arabia and the Arab League all warned any such declaration would have repercussions across the region.

A senior U.S. official told Reuters last week that Trump was likely to make the announcement on Wednesday, though his adviser and son-in-law Jared Kushner said over the weekend no final decision had been made.

Such a decision would break with decades of U.S. policy that Jerusalem’s status must be decided in negotiations.

Israel captured Arab East Jerusalem in the 1967 Middle East war. It later annexed it, declaring the whole of the city as its capital. The declaration is not recognized internationally and Palestinians want Jerusalem as the capital of their future state.

“This can go as far as severing Turkey’s ties with Israel. I am warning the United States not to take such a step which will deepen the problems in the region.”

Israel’s Prime Minister Benjamin Netanyahu has so far declined to speculate on what Trump might say.

But Israel Katz, Israel’s minister of intelligence and transport, took to Twitter to reject Turkey’s threat and reiterate Israel’s position on the ancient city, which is one of a long list of stumbling blocks in years of failed peace talks with the Palestinians.

“We don’t take orders or accept threats from the president of Turkey,” he wrote.

“There would be no more righteous or proper an historical move now than recognizing Jerusalem, the Jewish people’s capital for the past 3000 years, as the capital of the State of Israel.”

Two U.S. officials said on condition of anonymity that news of the plan to recognize Jerusalem as Israel’s capital had kicked up resistance from the State Department’s Near Eastern Affairs bureau (NEA), which deals with the region.

“Senior (officials) in NEA and a number of ambassadors from the region expressed their deep concern about doing this,” said one official, saying that the concerns focused on “security”.

The State Department referred questions to the White House. The White House did not immediately respond to requests for comment.

A fourth U.S. official said the consensus U.S. intelligence estimate on U.S. recognition of Jerusalem as Israel’s capital was that it would risk triggering a backlash against Israel, and also potentially against U.S. interests in the Middle East.

The European Union’s top diplomat, Federica Mogherini, said on Tuesday that “any action that would undermine” peace efforts to create two separate states for the Israelis and the Palestinians “must absolutely be avoided”.

Speaking alongside U.S. Secretary of State Rex Tillerson in Brussels, she said Jerusalem’s status would have to be agreed through negotiations.

The EU’s 28 foreign ministers will discuss the matter with Netanyahu in Brussels next Monday, to be followed by a similar meeting with Palestinian President Mahmoud Abbas early next year, she added.

Nabil Shaath, adviser to Palestinian President Mahmoud Abbas, told journalists gathered on the outskirts of Jerusalem near Bethlehem that any announcement along those lines would wreck peace efforts.

“If Mr. Trump really tomorrow or the day after tomorrow comes up and says that ‘I recognize united Jerusalem to be the capital of the state of Israel’ he has destroyed every chance that he will play to get the deal of the century that he has been talking about”.

The Arab League and Saudi Arabia repeated past warnings, following statements by France and Jordan in recent days.

The diplomats and leaders did not spell out what the consequences might be of any announcement. Past Israeli-Palestinian rifts have deteriorated into protests, attacks and fighting and further destabilised the region.

A fifth U.S. official said concerns of Palestinian and other Arab leaders about endorsing Israel’s claim to Jerusalem were being taken into account but no final decisions had been made.

Daniel Benjamin, a former U.S. counter terrorism official now at Dartmouth University, had a simple message: “This is playing with fire.