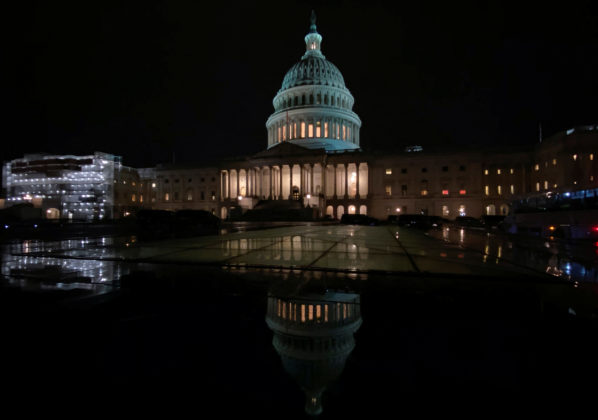 FILE PHOTO: The U.S. Capitol is seen at night during the Trump impeachment trial in Washington, U.S., January 31, 2020. REUTERS/Brendan McDermid

By Susan Cornwell and Makini Brice

WASHINGTON (Reuters) – A day before the Senate is expected to acquit President Donald Trump in his impeachment trial, the chamber’s top Republican on Tuesday exhorted senators to clear Trump and stop Democrats’ “factional fever” from scorching America’s system of government.

But Senate Majority Leader Mitch McConnell’s Democratic counterpart, Senator Chuck Schumer, said the president, not impeachment, was the threat to democracy in the United States.

The impeachment trial of the 45th U.S. president began on Jan. 16 and is winding to a close on Wednesday, when the deeply divided Senate is scheduled to vote on whether Trump should be removed from office. He appears assured of acquittal, with a two-thirds vote needed to remove him from office and his fellow Republicans occupying 53 of the Senate’s 100 seats.

Senators on Tuesday were delivering a series of speeches explaining how they will vote.

McConnell, who helped engineer a stripped-down trial with no witnesses or new evidence, lashed out during a speech on the Senate floor at the Democratic House of Representatives for pursuing impeachment.

The House impeached Trump on Dec. 18 on charges of abuse of power for asking Ukraine to investigate political rival Joe Biden and his son Hunter and obstruction of Congress for blocking testimony and documents sought in the investigation. The Constitution allows for the removal of a president for committing “high crimes and misdemeanors.”

“We must vote to reject the House abuse of power, vote to protect our institutions, vote to reject new precedents that would reduce the framers’ design to rubble, vote to keep factional fever from boiling over and scorching our republic,” McConnell said.

McConnell echoed the arguments made by Trump’s legal team that Democrats were seeking to annul the 2016 election in which Trump defeated Democrat Hillary Clinton.

“Washington Democrats think President Donald Trump committed a high crime or misdemeanor the moment – the moment – he defeated Hillary Clinton in the 2016 election. That is the original sin of this presidency – that he won and they lost,” McConnell said. “Ever since, the nation has suffered through a grinding campaign against our norms and institutions from the same people who keep shouting that our norms and institutions need defending.”

McConnell called the two charges constitutionally incoherent, though he did disagree with the view offered by Trump’s legal team that a president cannot be impeached without a violation of statutory law.

Shortly after McConnell spoke, top Senate Democrat Schumer said Trump’s actions in the Ukraine matter were the true threat to America. Schumer said that for a president to “blackmail a foreign country to interfere in our elections gets at the very core of what our democracy is about.”

“If Americans believe that they don’t determine who is president, who is governor, who is senator, but some foreign country out of reach can join us on elections, that is the beginning of the end of democracy,” Schumer said on the Senate floor.

Trump has drawn almost uniform support among Republican senators though several have called his actions wrong and inappropriate.

Trump is running for re-election in the Nov. 3 election. Former Vice President Biden is a leading contender for the Democratic nomination to challenge Trump. Besides aiming to unseat Trump, Democrats hope to keep their majority in the House and seek to seize the Senate from Republican control.

Trump is scheduled to deliver the annual State of the Union address to Congress in the House chamber on Tuesday night.

Any hints of fallout in the impeachment trial will be most closely watched in electoral districts and states closely divided between Republicans and Democrats and will play a pivotal role in November’s House and Senate races.

Any backlash against the impeachment drive could hurt some Democratic incumbents seeking re-election, while Republicans who have staunchly defended Trump could find themselves in a tough spot with their moderate constituents.

On Monday night, Republican U.S. Senator Lisa Murkowski, a moderate, said she would vote to acquit Trump but also sharply criticized the president and lawmakers in both parties.

“The president’s behavior was shameful and wrong. His personal interests do not take precedent over those of this great nation,” Murkowski said on the Senate floor.

House Speaker Nancy Pelosi, the top Democrat in Congress, said that even if the Senate votes to acquit the president as expected, Democrats have succeeded in uncovering Trump’s actions that they argue make him unfit for office or re-election.

“Whatever happens, he has been impeached forever. And now these senators, though they don’t have the courage to assign the appropriate penalty, at least are recognizing that he did something wrong,” Pelosi told the New York Times.