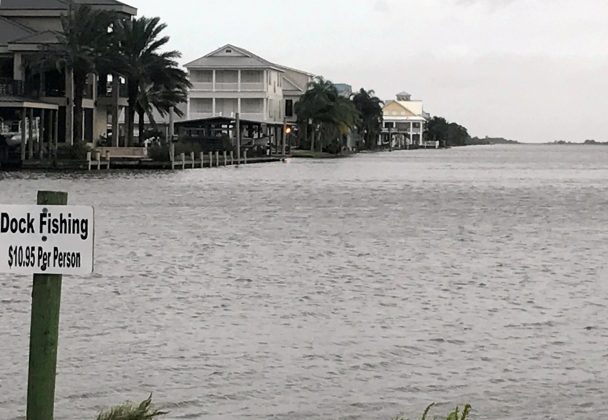 (Reuters) – A tropical storm whipped the southern tip of Florida with high winds and rain on Monday morning and was forecast to gain strength as it passed over the Gulf of Mexico toward Louisiana, officials said.

Tropical Storm Gordon was forecast to drop as much as 8 inches (20 cm) of rain in some areas of the U.S. South still reeling from hurricanes a year ago.

The storm was generating winds of 45 miles per hour (72 km/h) on Monday as it steamed west-northwest at 17 miles an hour (27 km/h), National Hurricane Center Director Kenneth Graham said in a video briefing on Facebook.

“It looks like for the next three or four days we’re going to be having to really watch close,” Graham said, “and remember if you’re even inland you can get some of these heavy rainfall totals so now is the time to be prepared.”

The National Hurricane Center warned of high winds around parts of Florida as the storm passed over the southern tip of the state on Monday morning.

The storm was expected to strengthen over the Gulf of Mexico, and reach the central Gulf Coast states of Alabama, Mississippi and Louisiana late on Tuesday, the National Hurricane Center said.

At the mouth of the Mississippi River, around the area of New Orleans, the storm could generate a surge of up to 4 feet (1 meter) and smaller surges could hit coastland along other parts of the Gulf Coast, Graham said.

“The combination of a dangerous storm surge and the tide will cause normally dry areas near the coast to be flooded by rising waters moving inland from the shoreline,” the National Hurricane Center said in a statement.

Louisiana Governor John Bel Edwards said on Sunday he had activated the state’s Crisis Action Team as a precaution.

There were no immediate indications that the storm had affected energy operations in the Gulf of Mexico area.