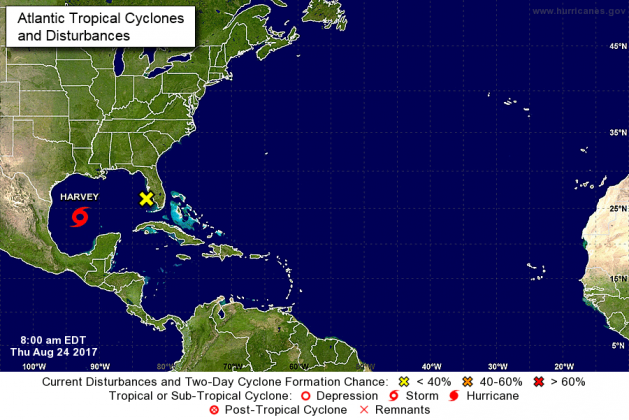 (Reuters) – The Texas Gulf Coast was getting ready for the tropical storm Harvey to make landfall by Friday, bringing with it strong winds, heavy flooding and torrential rains.

Hurricane, tropical storm and storm surge watches were in effect for counties on the eastern coast of Texas as the storm moved across the Gulf of Mexico, where it may strengthen into a hurricane.

“Now is the time to check your emergency plan and take necessary actions to secure your home or business. Deliberate efforts should be under way to protect life and property,” the weather service said in an statement early on Thursday.

The storm may strengthen into a hurricane by the time it makes landfall near Corpus Christi on Friday, the National Weather Service said.

Governor Greg Abbott declared a state of disaster on Wednesday for 30 counties, authorizing the use of state resources to prepare for the storm. Harvey “poses a threat of imminent disaster, including severe flooding, storm surge and damaging winds”, Abbott’s statement said.

Cities and counties along the state’s coastal region distributed sandbags to residents as some businesses boarded up windows. Coastal residents flocked to grocery stores to stock up on water and other supplies, local media reported.

Texas A&M University-Corpus Christi issued a mandatory evacuation to all students who live on campus and canceled events.

Royal Dutch Shell, Anadarko Petroleum and Exxon Mobil announced on Wednesday they were curbing some oil and gas output at facilities in the Gulf of Mexico ahead of the storm.