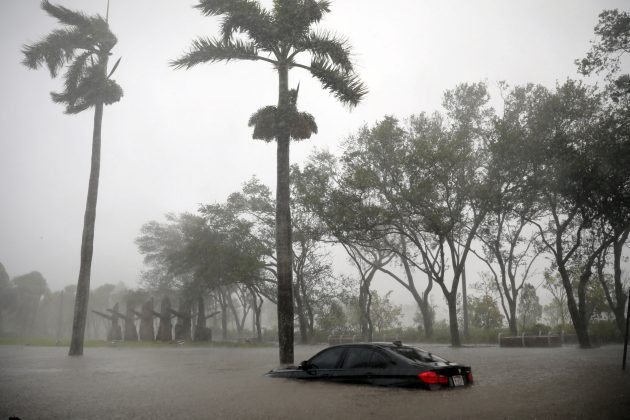 By Zachary Fagenson and Daniel Trotta

MIAMI/KISSIMMEE, Fla. (Reuters) – Downgraded from a hurricane to a tropical storm, Irma flooded several northern Florida cities with heavy rain and a high storm surge on Monday as it headed out of the state after cutting power to millions and ripping roofs off homes.

Irma, once ranked as one of the most powerful hurricanes recorded in the Atlantic, hit a wide swath of Florida over the past day, first making landfall on the Florida Keys archipelago and then coming ashore south of Naples before heading up the west coast.

Now a tropical storm with sustained winds of up to 70 miles per hour (110 km per hour), Irma was located about 35 miles (56 km) west of Gainesville and headed up the Gulf Coast, the National Hurricane Center said at 8 a.m. ET (1200 GMT).

The Cuban government reported on Monday that 10 people had been killed after Irma battered the island’s north coast with ferocious winds and 36-foot (11-meter) waves over the weekend. This raised the overall death toll from Irma’s powerful rampage through the Caribbean to 38.

“Stay inside. Go up. Not out,” Jacksonville’s website warned residents. “There is flooding throughout the city and more rain is expected.”

After what she called a terrifying night bunkered in her house in St. Petersburg, on Florida’s Gulf Coast, with her children and extended family, Julie Hally emerged with relief on Monday. The winds had toppled some large tree branches and part of a fence, but her house was undamaged.

“My heart just pounded out of my chest the whole time,” said Hally, 37. “You hear stuff hitting your roof. It honestly sounds like somebody is just whistling at your window the whole night. It’s really scary.”

Governor Rick Scott said he would travel later on Monday to the Florida Keys. Irma first came ashore at Cudjoe Key as a Category 4 hurricane with sustained winds of up to 130 mph (215 kph.)

U.S. President Donald Trump in a ceremony at the Pentagon to remember the victims of the Sept. 11, 2001, attacks vowed a full response to Irma, as well as continued federal support for victims of Hurricane Harvey, which flooded Texas.

“These are storms of catastrophic severity and we are marshalling the full resources of the federal government to help our fellow Americans,” Trump said. “When Americans are in need, Americans pull together and we are one country.”

The state’s largest city, Miami, was spared the brunt of the storm but still saw heavy flooding. Utility crews were already on the streets there clearing downed trees and utility lines. All causeways leading to Miami Beach were closed by police.

As it traveled through the center of the state early on Monday, Irma brought gusts of up to 100 mph (160 kph) and torrential rain to areas around Orlando, one of the most popular areas for tourism in Florida because of its cluster of theme parks, the National Weather Service said.

A piece of a McDonald’s “golden arch” sign hung in a tree near the fast-food restaurant in the central Florida city of Kissimmee on Monday morning. Valerie Gilleece, 55, had ridden out the storm in the city because her wheelchair-bound husband insisted on it, she said.

“I’m just thanking God to be alive,” Gilleece said. “I wanted to go from the start but he’s stubborn as hell.”

Over the weekend, Irma claimed its first U.S. fatality – a man found dead in a pickup truck that had crashed into a tree in high winds in the town of Marathon, in the Florida Keys, local officials said.

During its passage through the Caribbean en route to Florida, Irma was ranked at the rare top end of the scale of hurricane intensity, a Category 5, for days. It carried maximum sustained winds of up to 185 mph (295 kph) when it crashed into the island of Barbuda on Wednesday.

Ahead of Irma’s arrival, some 6.5 million people in southern Florida, about a third of the state’s population, were ordered to evacuate their homes. Some 200,000 were housed in shelters during the storm, according to federal officials.

That estimate, lower than earlier forecasts of up to $50 billion in insured losses, drove insurance company shares higher on Monday. Florida-based insurers Federated National, HCI Group and Universal Insurance were all up more than 12 percent. Meanwhile, Europe’s insurance index was the biggest sectoral gainer, up 2 percent and set for its best day in more than four months.

Miami International Airport, one of the busiest in the country, halted passenger flights through at least Monday. According to the FlightAware.com tracking site, a total of 3,582 U.S. flights were canceled on Monday, mostly as a result of the storm.

Irma was forecast to cross the eastern Florida Panhandle and move into southern Georgia later in the day, dumping as much as 16 inches (41 cm) of rain, government forecasters said.

Police in Miami-Dade County said they had made 29 arrests for looting and burglary.