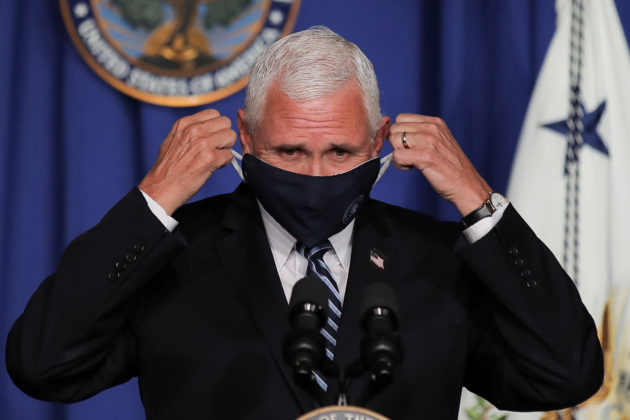 WASHINGTON (Reuters) – The Trump administration is holding talks with Oregon’s governor about containing anti-racism protests in Portland after clashes with federal officers guarding facilities there, but President Donald Trump said on Wednesday federal agents would not be pulled out until the city was secured.

The Associated Press, citing an unidentified White House official, reported on Wednesday the Trump administration held out the possibility of drawing down the federal troop presence if the state stepped up its own enforcement.

Trump said at the White House the federal presence would remain for now.

“We’re not leaving until they secure their city. We told the governor, we told the mayor: Secure your city,” Trump said, repeating his threat to send more federal officers if the situation gets worse.

“The violence in Portland has got to stop. It is clear that the local leadership and the mayor of Portland are not willing to step up. That’s why we’re talking to Governor Kate Brown and the state of Oregon about working a way forward,” Pence told Fox.

The federal government has deployed teams of agents, at times heavily armed and clad in camouflage, to the Portland protests, drawing criticism from Democrats and civil liberties groups who allege excessive force and federal overreach by President Donald Trump.

Brown and Portland’s mayor, both Democrats, have complained they never asked for the federal agents and their presence was worsening the situation with protesters.

Talks with the governor’s office are in early stages and there is no agreement, the White House official told the AP on condition of anonymity.

Pence said the Trump administration was committed to protecting the federal courthouse in the downtown area and federal officials would get the protection they need.

Solidarity protests spread over the weekend to other U.S. cities.

Trump, a Republican seeking re-election in November, has sought to crack down on protests to highlight his focus on law and order amid unrest across the country after the May 25 killing of a Black man, George Floyd, by Minneapolis police.