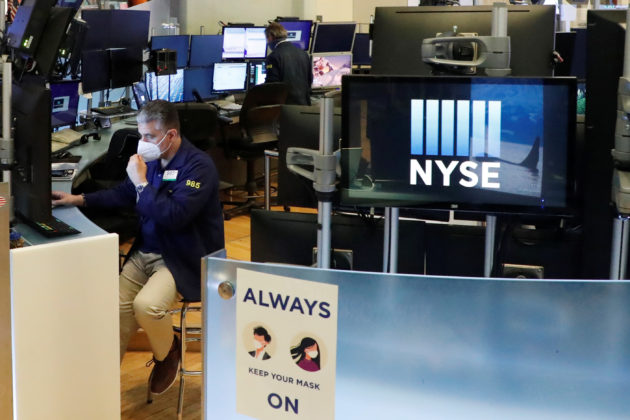 FILE PHOTO: A trader adjusts his mask as he works on the floor of the New York Stock Exchange as the outbreak of the coronavirus disease (COVID-19) continues in the Manhattan borough of New York, U.S., May 28, 2020. REUTERS/Lucas Jackson

By Medha Singh and Devik Jain

(Reuters) – Wall Street’s main indexes rose on Wednesday as a slew of positive earnings updates and hopes for a dovish tone from the Federal Reserve overshadowed concerns about next steps for the government’s coronavirus support plan.

AMD shares were among the top boosts to the benchmark S&P 500 and the Nasdaq. The Philadelphia chip index <.SOX> rose 1.1%.

Starbucks Corp <SBUX.O> climbed 4% after the coffee chain said business was “steadily recovering” worldwide and it would return to profitability in the current quarter.

Of the 163 S&P 500 firms that have reported results, 79.1% have surpassed a low bar of quarterly profit expectations, according to Refinitiv IBES data.

Recent data pointed to a possible slowdown in business and hiring as infections spiked in southern and western U.S. states, and deaths from the novel coronavirus approached 150,000 in the country on Wednesday.

Investors will keep a close watch on how the U.S. central bank addresses these economic risks at the end of a two-day policy meeting. The Fed’s statement is expected at 2 p.m. ET (1800 GMT), which will be followed by Chair Jerome Powell’s press conference.

Emergency monetary stimulus measures along with trillions of dollars in fiscal support have been pivotal in driving a sharp recovery in the U.S. stock markets since March.

“The biggest catalyst within the market right now — for at least the bullish sentiment — is where’s the next wave of liquidity,” said Andrew Smith, chief investment strategist, Delos Capital Advisors, based in Dallas.

U.S. President Donald Trump said on Wednesday his administration and Democrats in Congress were far apart in their efforts to come together on a coronavirus relief bill, and he suggested he was not in a hurry to strike a deal.

Eight of the 11 major S&P sectors were higher with technology stocks providing the biggest boost to the S&P 500 index.

Boeing Co <BA.N> slipped 1.9% as the planemaker slashed production on its widebody programs and reported a bigger-than-expected quarterly loss due to the fallout from the pandemic.

Industrial conglomerate General Electric Co <GE.N> saw less cash outflow than estimated in the second quarter even as it reported a wider-than-expected loss. Its shares fell 3%.

The chief executives of Amazon.com Inc <AMZN.O>, Facebook Inc <FB.O>, Apple Inc <AAPL.O> and Alphabet’s Google <GOOGL.O> are set to face a congressional hearing on antitrust on Wednesday, marking their first time appearing before lawmakers together.

All four companies are set to report results on Thursday.

(Reporting by Medha Singh and Devik Jain in Bengaluru; Editing by Shounak Dasgupta)