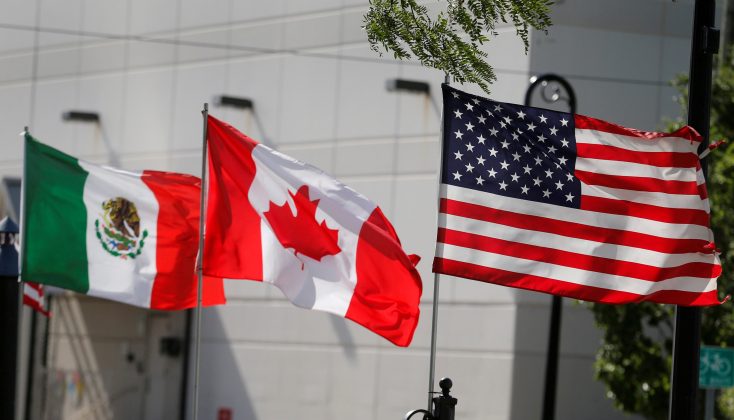 FILE PHOTO: Flags of the U.S., Canada and Mexico fly next to each other in Detroit, Michigan, U.S. August 29, 2018. REUTERS/Rebecca Cook/File Photo

WASHINGTON (Reuters) – U.S. President Donald Trump on Monday took credit for salvaging a trilateral free trade accord with Canada and Mexico, marking it as a victory in his campaign to reshape global commerce as financial markets breathed a sigh of relief.

The deal, announced on Sunday, is a reworking of the 1994 North American Free Trade Agreement, which underpins $1.2 trillion in trade between the three countries. Trump had described NAFTA as a bad deal for Americans and threatened to eliminate it as part of his “America First” agenda.

While changing NAFTA and bringing down U.S. trade deficits was a top Trump campaign pledge, Sunday’s agreement largely leaves the broader deal intact and maintains supply chains that would have been fractured under weaker bilateral deals.

U.S., Canadian and Mexican stocks were trading higher on Monday, with the benchmark S&P 500 index.SPX rising more than 0.7 percent and the Toronto Stock Exchange’s S&P/TSX index. GSPTS gaining about 0.4 percent.

Trump, who is scheduled to make a statement at 11 a.m. EDT (1500 GMT), on Twitter called the agreement with the United States’ northern neighbor “wonderful” and “a historic transaction.”

“It is a great deal for all three countries, solves the many deficiencies and mistakes in NAFTA, greatly opens markets to our Farmers and Manufacturers, reduce Trade Barriers to the U.S. and will bring all three Great Nations closer together in competition with the rest of the world,” Trump wrote.

Canadian Prime Minister Justin Trudeau on Sunday called it “a good day for Canada” after negotiators worked frantically ahead of the U.S.-imposed midnight deadline. He is scheduled to speak to reporters at noon EDT (1600 GMT).

The pact preserved a key trade dispute settlement mechanism sought by Canada even as Ottawa agreed to open up its dairy markets to U.S. farmers.

The deal effectively maintains the current auto sector and largely spares Canada and Mexico from the prospect of U.S. tariffs on their vehicles, although it will make it harder for global automakers to build cars cheaply in Mexico.

Trump vowed during his 2016 presidential campaign to tear up current U.S. trade deals, which he blamed for a loss of American manufacturing jobs. His administration has abandoned other trade accords and slapped tariffs on a number of key trading partners, including China. 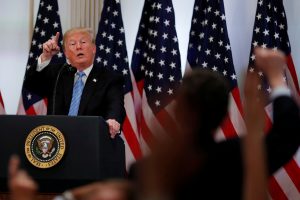 U.S. President Donald Trump takes a question from a New York Times reporter during a news conference on the sidelines of the 73rd session of the United Nations General Assembly in New York, U.S., September 26, 2018. REUTERS/Carlos Barria

Mexican Economy Minister Ildefonso Guajardo on Monday said the new accord could be signed by the three countries’ leaders when they meet at a G20 summit in Buenos Aires in late November.

The deal does not include any changes to separate U.S. tariffs on steel and aluminum levied on a number of Washington’s trading partners, including Canada, Mexico, China and the European Union.

Mexican Foreign Minister Luis Videgaray on Monday said he hoped concerns over the metals tariffs could be resolved before the new trilateral deal is signed.

Navarro, in his interview with Fox, said the two trade issues were separate.

U.S. officials intend to sign the new trilateral deal by Nov. 30, Navarro said. It would then be submitted for approval by the U.S. Congress, currently controlled by Trump’s fellow Republicans.

U.S. Senator Pat Roberts, a Kansas Republican who oversees the Senate’s agricultural committee, said he was “eager to review the details” of the deal and noted the outsized role trade with Canada and Mexico had on rural U.S. states like his.

U.S. Senator Joni Ernst of Iowa, a top farming state, praised the agreement in a tweet on Monday: “Our farmers need stability and access to markets.”

Democratic U.S. Senator Amy Klobuchar of Minnesota, which borders Canada, also said she would review the terms and was glad her state’s “number one trading partner” was “back in the mix.”

The United States and Mexico clinched a bilateral agreement in late August after the Trump administration sought separate lines of talks, leaving Canada to negotiate its own terms.