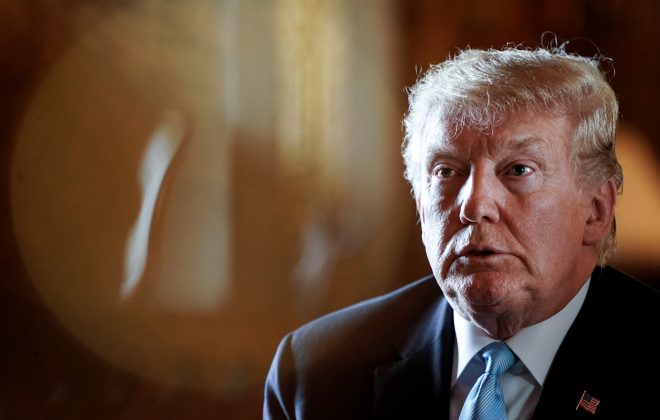 U.S. President Donald Trump listens to a question as he speaks to reporters at his Mar-a-Lago estate in Palm Beach, Florida, U.S., March 29, 2019. REUTERS/Joshua Roberts

By Susan Heavey and Jonathan Stempel

WASHINGTON/NEW YORK (Reuters) – U.S. President Donald Trump on Monday injected himself into one of the most consequential cases of the current Supreme Court term, saying the nation’s 2020 census would be “meaningless” without adding a citizenship question to the questionnaire.

The comment on Twitter came ahead of an expected ruling from the Supreme Court on whether Commerce Secretary Wilbur Ross’ decision to add the citizenship question violated federal law.

“Can you believe that the Radical Left Democrats want to do our new and very important Census Report without the all important Citizenship Question,” Trump tweeted. “Report would be meaningless and a waste of the $Billions (ridiculous) that it costs to put together!”

The citizenship question is among a series of White House policies signaling tighter control over immigration.

These include Trump’s declaration in February of a national emergency to obtain funds for a wall on the U.S.-Mexico border, and his threat to close the border as soon as this week, disrupting legal crossings as well as trade.

The U.S. Constitution requires a census every 10 years, with results used to draw political boundaries, allocate seats in Congress and at the state and local level, and distribute roughly $800 billion of federal funds.

Critics have accused Trump of encouraging an undercount by dissuading immigrants from participating in the census, more likely hurting Democrats than Republicans.

When Ross announced the addition of a citizenship question in March 2018, he said it was in response to a Department of Justice request for data to help enforce the Voting Rights Act, which protects eligible voters from discrimination.

Only U.S. citizens can vote in federal elections. Non-citizens comprise about 7 percent of the 328.7 million people living in the United States. Census questionnaires have not included a citizenship question since 1950.

“The census is the administration’s new front on its war on immigration and, sadly, the president’s tweet today bears out that concern,” said Terri Ann Lowenthal, a former staff director on the House census oversight committee who now advises groups seeking an accurate 2020 count.

The Supreme Court is reviewing a Jan. 15 by U.S. District Judge Jesse Furman in Manhattan, finding that the addition of the citizenship question was illegal and that Ross’ decision to add it was “arbitrary and capricious.”

Oral arguments are scheduled for April 23, with a decision expected by the end of June.

Furman said Commerce Secretary Wilbur Ross broke a “veritable smorgasbord” of federal rules by including the question, and that enforcement of the Voting Rights Act was a “pretextual” rationale for adding it.

The judge said adding the question would cause many states to lose federal funding, while Arizona, California, Florida, Illinois, New York and Texas would lose Congressional seats.

Furman, an appointee of former President Barack Obama, stopped short of a finding that Ross intended to discriminate against immigrants.

The decision came in a lawsuit brought by 18 U.S. states, 15 cities and a variety of civil rights groups.

In urging the Supreme Court to overturn Furman’s ruling, Solicitor General Noel Francisco said Ross had discretion to add the citizenship question, and that there was a “long pedigree” in the census for asking about citizenship or country of birth.

He also said other democracies including Australia, Canada, France, Germany, Indonesia, Ireland, Mexico, Spain, and the United Kingdom ask about citizenship on their censuses.

Following that ruling, the Supreme Court said it will also decide whether Ross’ actions violated the Constitution’s Enumeration Clause, which sets out terms for counting people.