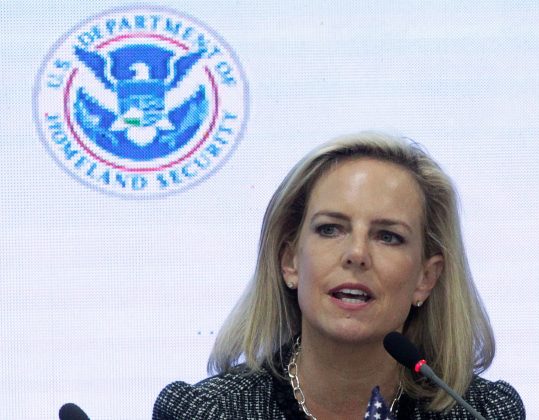 WASHINGTON (Reuters) – The Trump administration will speed up the deployment of hundreds of officers on the southern border of the United States and will dramatically expand a policy of returning migrants seeking asylum to Mexico, Department of Homeland Security Secretary Kirstjen Nielsen said on Monday.

The U.S. Customs and Border Protection agency first announced the redeployment of 750 officers to process a surge of migrant families entering the United States last week.

In a written statement, Nielsen said she had ordered CBP Commissioner Kevin McAleenan to undertake “emergency surge operations” and immediately speed up the reassignment.

CBP also has the authority to raise the number of redeployed personnel past 750, and will notify Nielsen if they plan to reassign more than 2,000 officers.

The agency will also “immediately expand” a policy to return Central American migrants to Mexico as they wait for their asylum claims to be heard by “hundreds of additional migrants per day above current rates,” Nielsen said.

That would be a dramatic expansion of the policy, dubbed the Migrant Protection Protocols, put in place in January. As of March 26, approximately 370 migrants had been returned to Mexico, a Mexican official told Reuters last week.

Asked about the numbers, a DHS spokeswoman declined to confirm them and said the policy “is still in the early stages of implementation.”

The policy is aimed at curbing the flow of mostly Central American migrants trying to enter the United States. Trump administration officials say a system that allows asylum seekers to remain in the country for years while waiting for their cases to move through a backlogged immigration court system encourages illegal immigration.

The American Civil Liberties Union and other groups sued the Trump administration over the policy, claiming it violates U.S. law.

But following a March 22 hearing on whether the program should be halted, U.S. District Judge Richard Seeborg in San Francisco ordered both sides to submit further briefing on the question of whether or not the California court has jurisdiction to preside over the case, likely prolonging any decision on the policy.

One thought on “Trump administration to hasten officer deployment to U.S.-Mexico border: statement”