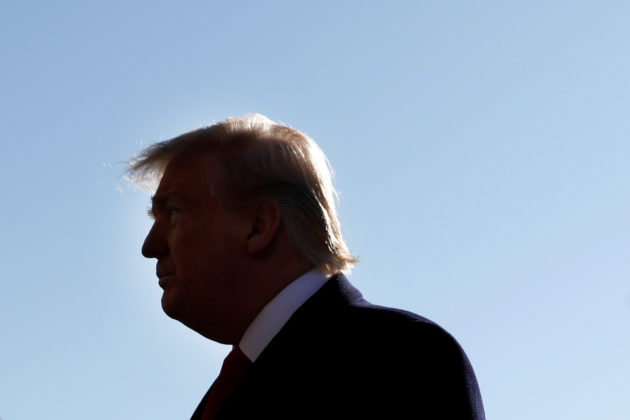 U.S. President Donald Trump speaks to the media on the South Lawn of the White House in Washington, U.S., before his departure to India, February 23, 2020. REUTERS/Yuri Gripas

(Reuters) – A sharply divided federal appeals court on Monday said the Trump administration may enforce a rule labeled by critics as a “gag rule” that could deprive abortion providers of federal funding for family planning.

In a 7-4 decision, the 9th U.S. Circuit Court of Appeals upheld a ruling last June by a unanimous three-judge panel to lift injunctions won by California, Oregon and Washington against the rule, which deprives clinics that provide abortion referrals of Title X family planning funds.

The rule was meant to help President Donald Trump fulfill a 2016 campaign pledge to end federal support for Planned Parenthood, which received about $60 million annually, or one-fifth, of Title X funds.

Planned Parenthood left the program last August rather than comply with the rule, which is enforced by the U.S. Department of Health and Human Services.

Writing for Monday’s majority, Circuit Judge Sandra Ikuta said HHS was owed “broad deference” and acted reasonably, not arbitrarily or capriciously, in adopting a “less restrictive” rule than the one blessed by the Supreme Court in 1988.

“There is no ‘gag’ on abortion counseling,” Ikuta wrote, saying the rule allows healthcare providers to discuss, though not to encourage, abortion.

The appeals court returned the cases to federal district courts for further proceedings. A federal judge in Baltimore on Feb. 14 blocked the rule’s enforcement in Maryland.

“The consequences will be borne by the millions of women who turn to Title X-funded clinics for lifesaving care and the very contraceptive services that have caused rates of unintended pregnancy – and abortion – to plummet,” he wrote. “I strongly dissent.”

(Reporting by Jonathan Stempel in New York and Nate Raymond in Boston; Editing by Steve Orlofsky and Sonya Hepinstall)