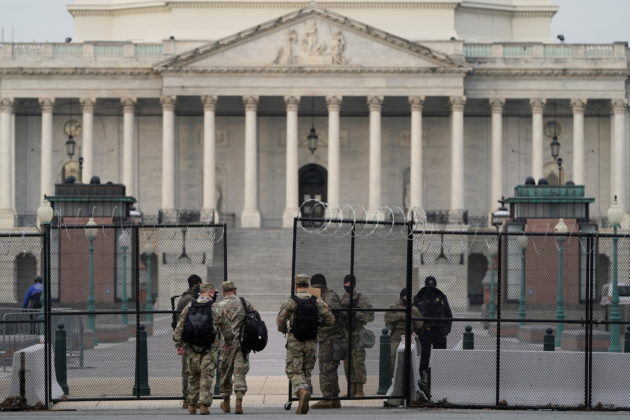 Members of the National Guard patrol at the U. S. Capitol as the second impeachment trial of former U.S. President Donald Trump is scheduled to begin in Washington, U.S., February 9, 2021. REUTERS/Joshua Roberts

WASHINGTON (Reuters) – Donald Trump’s historic second impeachment trial, on a charge of inciting last month’s deadly storming of the U.S. Capitol, opens on Tuesday with a debate over the constitutionality of the Senate trying a president after he has left office.

Trump’s lawyers plan to open the trial on Tuesday by questioning whether the U.S. Constitution allows the Senate to hold an impeachment trial for a president after he has left office, as Trump did on Jan. 20.

Most Senate Republicans have embraced that argument, which strongly suggests that Democrats will be unable to garner the two-thirds majority needed to convict in the 100-member Senate. Democrats and many legal scholars reject the Republicans’ constitutional interpretation.

Senate Democrats are expected to prevail in Tuesday’s vote on the constitutionality of the trial. A Republican effort to block the trial on those grounds was defeated 55-45 last month.

Trump, a Republican, was impeached by the Democratic-led House of Representatives on Jan. 13 on a charge of inciting an insurrection, becoming the only president to have been impeached twice and the only former president to face a Senate trial.

Eager to get beyond debates over the constitutionality of the trial, a group of nine House Democratic impeachment managers prosecuting the case will present arguments that “will be more like a violent-crime criminal prosecution, because that is what it is,” a senior aide told reporters. The managers aim to prove Trump “incited a violent insurrection to interfere with the peaceful transfer of power. That is the most serious of constitutional crimes,” an aide said.

“When you have such a serious charge, sweeping it under the rug will not bring unity – it will keep the sore open, the wounds open. You need truth and accountability. I believe the managers will present a very strong case,” Senate Majority Leader Chuck Schumer, a Democrat, told reporters.

The trial could provide clues on the direction of the Republican Party following Trump’s tumultuous four-year presidency. Sharp divisions have emerged between Trump loyalists and those hoping to move the party in a new direction.

The House Democrats face a high bar, needing the votes of at least 17 Republicans as well as all 48 Democrats and the two independents who caucus with them to secure a conviction. Democrats also hope to disqualify Trump from ever again holding public office.

On Wednesday, the prosecution and defense will turn to the merits of the charge. They have a total of 32 hours evenly divided over no more than four days to present their cases.

The arguments would begin midday on Wednesday. The proceedings could be extended further as senators would have time to question both sides.

If House managers want to call witnesses or subpoena documents, the Senate would have to vote to allow those. Trump lawyers and House managers could question witnesses – a far more exhaustive procedure than Trump’s first impeachment trial, which had no witness testimony.

Trump’s defense is also anchored in the argument that he was exercising his constitutional right to free speech in urging backers to “fight” to overturn the election result.

His lawyers said in a pretrial document that Trump was using the word “fight” in a “figurative sense,” adding: “Notably absent from his speech was any reference to or encouragement of an insurrection, a riot, criminal action, or any acts of physical violence whatsoever.”

One year ago, the then Republican-controlled Senate acquitted Trump on charges of obstructing Congress and abuse of power related to his pressure on Ukraine to launch an investigation into Biden and his son Hunter in 2019.