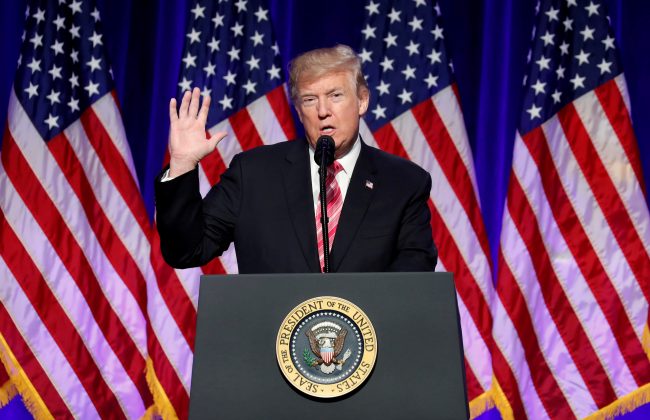 U.S. President Donald Trump gestures as he speaks during his visit at the Civil Rights Museum in Jackson, Mississippi, U.S. December 9, 2017. REUTERS/Kevin Lamarque

By Amanda Becker and Steve Holland

WASHINGTON (Reuters) – U.S. President Donald Trump will make a final push on Wednesday to shepherd a Republican tax overhaul across the finish line, hosting congressional negotiators for lunch before a speech in which he will make closing arguments for the legislation.

Republican tax writers from the Senate and House of Representatives worked into Tuesday evening to reconcile differences between the separate plans passed by each chamber, as important details, including a final corporate tax rate, remained in flux.

Jones’ victory trims the Republicans’ already narrow Senate majority to 51-49, which could make it more difficult for them to push through legislation.

Senate Democratic Leader Chuck Schumer on Wednesday will call on Republicans to delay the tax vote until the newest senator can be seated, likely in early January.

Republicans were still trying to finalize important details without increasing the deficit impact of legislation, which could add as much as $1.5 trillion to the national debt over the next decade, according to independent estimates.

Both House and Senate bills proposed slashing the corporate rate to 20 percent from 35 percent, but negotiators were discussing on Tuesday whether to raise that rate to 21 percent in the final bill, lawmakers said.

Tax writers were also still determining a top rate for individual taxpayers and weighing how to best scale back popular individual deductions for mortgage interest and local tax payments that the Senate and House bills treated differently.

Trump is seeking to sign a tax bill by the end of the year to achieve Republicans’ first major legislative victory since they took control of both chambers of Congress and the White House in January.

After hosting Republican lawmakers for lunch, Trump will deliver his speech on tax legislation alongside five middle class families who would benefit, senior administration officials said.

He was expected to counter claims the Republican tax plan would largely benefit corporations and the wealthy by highlighting how it would also cut rates for lower- and middle-income taxpayers, who could see additional benefits, such as higher wages, result from the corporate rate cut, the officials said.

Independent government analyses by the nonpartisan Joint Committee on Taxation, which assists congressional tax writers, and the Congressional Budget Office, which examines the budget impact of legislation, both concluded that wealthier taxpayers would disproportionately benefit from the Republican proposals.

When asked who stands to benefit most from Republican tax legislation, more than half of American adults selected either the wealthy or large U.S. corporations, according to a Reuters/Ipsos poll released on Monday.