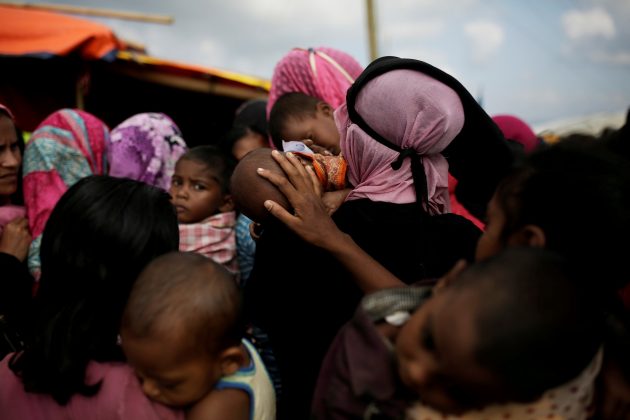 A woman calms a baby as Rohingya refugees line up for a food supply distribution at the Kutupalong refugee camp near Cox's Bazar, Bangladesh December 12, 2017. REUTERS/Alkis Konstantinidis

UNITED NATIONS (Reuters) – A top U.N. official recounted to the Security Council on Tuesday “heartbreaking and horrific accounts of sexual atrocities” by Myanmar soldiers against Rohingya Muslim women, urging the body to visit the region and demand an end to attacks on civilians.

Pramila Patten, special envoy of U.N. Secretary-General Antonio Guterres on sexual violence in conflict, said one woman told her she was held by Myanmar troops for 45 days and raped repeatedly, while another woman could no longer see out of one eye after it was bitten by a soldier during a sexual assault.

“Some witnesses reported women and girls being tied to either a rock or a tree before multiple soldiers raped them to death,” Patten told the Security Council.

“Some women recounted how soldiers drowned babies in the village well. A few women told me how their own babies were allegedly thrown in the fire as they were dragged away by soldiers and gang raped,” she said.

Patten said the 15-member Security Council should visit Myanmar – also known as Burma – and Cox’s Bazar in Bangladesh, where more than 626,000 refugees have fled to since violence erupted in Myanmar’s northern Rakhine State on Aug. 25.

She said that a Security Council resolution demanding an immediate end to violations against civilians in Rakhine state and outlining measures to hold the perpetrators accountable “would send an important signal.”

“This is unacceptable,” said U.S. Ambassador to the United Nations Nikki Haley. “Burma must allow an independent, transparent and credible investigation into what has happened.”

“While we are hearing promises from the government of Burma, we need to see action,” she said.

Myanmar has been stung by international criticism for the way its security forces responded to Aug. 25 attacks by Rohingya militants on 30 security posts. Last month the Security Council urged the Myanmar government to “ensure no further excessive use of military force in Rakhine state.”

China’s Deputy U.N. Ambassador Wu Haitao said the crisis had to be solved through an agreement between Myanmar and Bangladesh and warned that any solution “reached under strong pressure from outside may ease the situation temporarily but will leave negative after effects.”

The two countries signed an agreement on voluntary repatriation Nov. 23. U.N. political affairs chief Jeffrey Feltman pushed on Tuesday for the United Nations to be involved in any operation to return Rohingya.

“Plans alone are not sufficient. We hope Myanmar will draw upon the wealth of expertise the U.N. can offer,” Feltman told the Security Council.