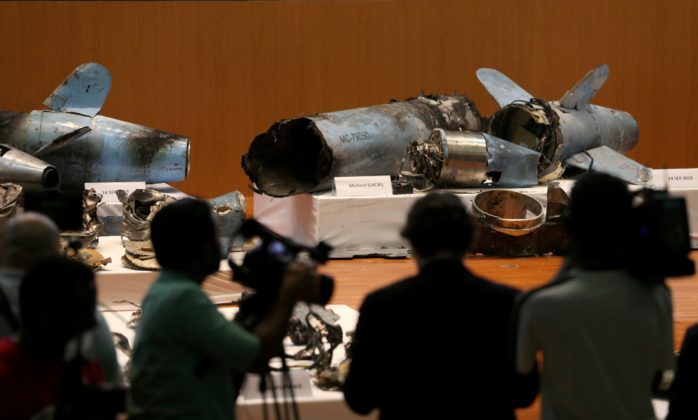 By Stephen Kalin and Parisa Hafezi

JEDDAH/DUBAI (Reuters) – U.S. President Donald Trump on Wednesday said he ordered a major increase in sanctions on Iran as Saudi Arabia displayed remnants of drones and missiles it said Tehran used in a crippling weekend attack on its oil facilities.

Trump gave no explanation in a brief Twitter posting announcing the order, but the initiative follows repeated U.S. assertions that the Islamic Republic was behind Saturday’s attack on the kingdom, a close U.S. ally.

“I have just instructed the Secretary of the Treasury to substantially increase sanctions on the country of Iran!,” he wrote.

Iran, however, again denied involvement in the Sept. 14 raids, which hit the world’s biggest crude processing facility and initially knocked out half of Saudi production.

“We don’t want conflict in the region … Who started the conflict?” he added, blaming Washington and its Gulf allies for the war in Yemen.

However, the Saudi Defense Ministry held a news conference, displaying drone and missile debris it said was “undeniable” evidence of Iranian aggression. A total of 25 drones and missiles were used in the attacks launched from Iran not Yemen, the ministry spokesman added.

Saturday’s attack exposed the vulnerability of Saudi Arabia’s oil infrastructure and threw down a gauntlet to the United States, which wants to curb Tehran’s influence in the region.

Proof of Iranian responsibility could pressure Riyadh and Washington into a response, though both nations were stressing the need for caution.

Trump has said he does not want war and is coordinating with Gulf and European states.

Saudi Arabia’s Crown Prince Mohammed bin Salman said the hit on the world’s biggest crude exporter was a “real test of the global will” to confront subversion of the international order.

His envoy to London, Prince Khalid bin Bander, told the BBC the attack was “almost certainly” Iranian-backed, however: “We’re trying not to react too quickly because the last thing we need is more conflict in the region.”

U.S. Secretary of State Mike Pompeo was to meet Prince Mohammed in Jeddah on Wednesday to discuss the crisis before heading to the United Arab Emirates.

U.N. officials monitoring sanctions on Iran and Yemen were also heading to Saudi Arabia to investigate.

France, which is trying to salvage an international nuclear deal with Iran that Washington quit last year, said it wanted to establish the facts before reacting.

The officials did not provide evidence or explain what U.S. intelligence they were using for evaluating the attack, which cut 5% of global production.

Saudi Arabia said on Tuesday the 5.7 million barrels per day of output lost would be fully restored by the end of the month.

Oil prices fell after the Saudi reassurances, having surged more than 20% at one point on Monday – the biggest intra-day jump since the 1990-91 Gulf War. [O/R]

Saudi Arabia’s finance minister told Reuters on Wednesday the attack had no impact on revenues and Aramco was continuing to supply markets without interruption.

U.S. efforts to bring about a U.N. Security Council response look unlikely to succeed as Russia and China have veto powers and are expected to shield Iran.

Russian President Vladimir Putin, who has offered to sell Riyadh defense systems, called for a “thorough and impartial” probe during a phone call with Prince Mohammed.

The assault exposed serious gaps in Saudi air defense despite billions of dollars spent on Western military hardware and repeated attacks on vital assets during its four-and-a-half year foray into the Yemen war.

“The attack is like Sept. 11th for Saudi Arabia, it is a game changer,” said one Saudi security analyst.

Already frayed U.S.-Iran ties deteriorated further when Trump quit the nuclear pact and reimposed sanctions, severely hurting the Iranian economy. Iran has ruled out talks with Washington unless it returns to the pact.

Trump said he is not looking to meet Rouhani during a U.N. event in New York this month. Rouhani and his foreign minister may not attend the General Assembly at all unless U.S. visas are issued in the coming hours, state media reported Wednesday.

Washington and its Gulf allies want Iran to stop supporting regional proxies, including in Yemen, Iraq and Lebanon.

Despite years of air strikes against them, the Houthi movement boasts drones and missiles able to reach deep into Saudi Arabia, the result of an arms race since the Western-backed coalition intervened in Yemen in March 2015.

Iran’s clerical rulers support the Houthis, who ousted Yemen’s internationally recognized government from power in the capital Sanaa in late 2014. But Tehran denies it actively supports them with military and financial support.

Iran maintains the largest ballistic and cruise missile capabilities in the Middle East that could overwhelm virtually any Saudi missile defense system, according to think-tank CSIS, given the geographic proximity of Tehran and its proxy forces.

But even more limited strikes have proved too much for Saudi Arabia, including recent ones claimed by the Houthis on a civilian airport, oil pumping stations and the Shaybah oilfield.