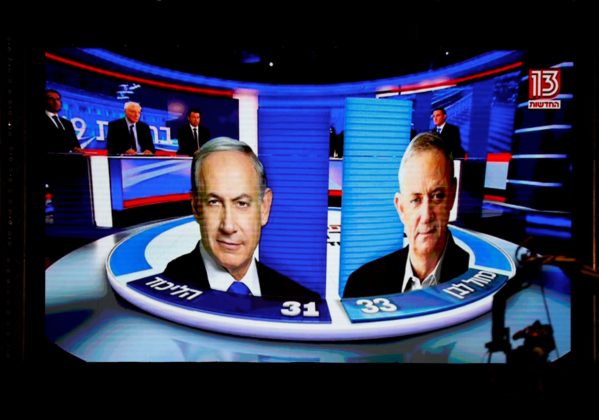 JERUSALEM (Reuters) – Israeli Prime Minister Benjamin Netanyahu failed to win a ruling majority in an election that produced a virtual tie between his right-wing bloc and a center-left grouping that would be led by former military chief Benny Gantz.

The outcome, according to almost complete results published on Wednesday, dealt a new blow to Israel’s longest-serving leader who was already weakened by the inability to put together an administration after an inconclusive election in April.

But with coalition-building again key to forming a government, it could be days or even weeks before it becomes clear whether the wily politician hailed by supporters as “King Bibi” has been dethroned after a decade in power.

With Israeli media reporting more than 90 percent of votes counted in Tuesday’s election, the bloc led by Netanyahu’s Likud party was more or less even with a likely grouping headed by Gantz’s centrist Blue and White party.

A Likud-led bloc looked poised to control 55 of parliament’s 120 seats, with 56 going to a center-left alliance, numbers falling short of a majority government of 61 lawmakers.

A Likud spokesman said the leaders of right-wing factions met Netanyahu at the prime minister’s office on Wednesday and pledged to work with him to form the next government.

Lieberman has been pushing for a unity government comprised of the biggest parties. He declined to back Netanyahu’s bid to form a narrow right-wing and religious coalition after the April election, bringing about Tuesday’s unprecedented repeat vote.

Netanyahu, who made his close relationship with U.S. President Donald Trump a main selling point in his campaign, has made no claim of victory or concession of defeat, and he planned to address Likud party legislators later in the day.

Some of the party’s leaders issued nearly identical statements expressing their allegiance to Netanyahu.

“He remains party chairman and its candidate to continue as prime minister,” said Energy Minister Yuval Steinitz of Likud.

Netanyahu, 69, appeared fatigued and hoarse in a 3 a.m. election night speech to party faithful earlier on Wednesday in which he said he intended to form a “Zionist government”, without Arab parties that could lend support to Gantz.

Once the last votes are tallied, Israeli President Reuven Rivlin will consult with leaders of parties that won parliamentary representation about whom to tap to try to form a government. The nominee would then have up to 42 days to do so.

Gantz has not ruled out a unity administration with Likud but has said Blue and White would not join such a government if it included Netanyahu, citing looming corruption charges against the prime minister, who has denied any wrongdoing.

In a further complication, Lieberman has rejected any alliance that includes ultra-Orthodox parties – Netanyahu’s traditional partners.

Lieberman, a Jewish settler and immigrant from the former Soviet Union, had focused his campaign on weakening the power rabbis and religious politicians have on everyday life in Israel, such as ultra-Orthodox control of the administration of marriage and divorce.

Campaigns run by Likud and Blue and White pointed to only narrow differences on many important issues: the regional struggle against Iran, the Palestinian conflict, relations with the United States and the economy.

An end to the Netanyahu era would be unlikely to bring about a significant change in policy on hotly disputed issues in the peace process with the Palestinians that collapsed five years ago.

Three corruption investigations and the Israeli attorney general’s announced intention to charge him with fraud and bribery have also chipped away at Netanyahu’s seeming invincibility.

Netanyahu can argue at a pre-trial hearing in October against indictment. But an election loss could leave him more at risk of prosecution in the graft cases, without the shield of parliamentary immunity that his current political allies had promised to seek for him.