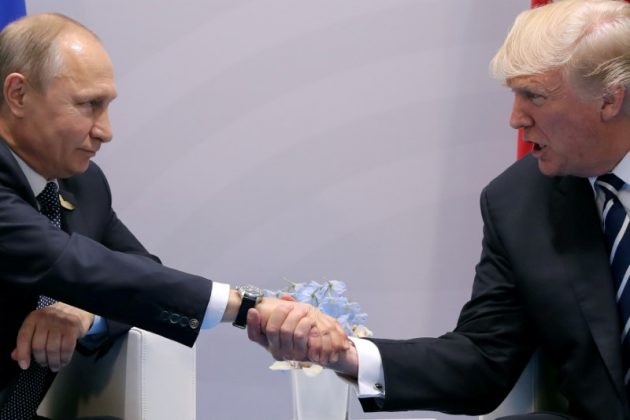 By Steve Holland and Patricia Zengerle

WASHINGTON (Reuters) – U.S. President Donald Trump and Russian President Vladimir Putin had a previously undisclosed conversation during a dinner for G20 leaders at a summit earlier this month in Germany, a White House official said on Tuesday.

The two leaders held a formal two-hour bilateral meeting on July 7 in which Trump later said Putin denied allegations that he directed efforts to meddle in the 2016 U.S. presidential election.

Trump’s interactions with the Russian leader were scrutinized closely because of those allegations, which have dominated his first six months in the White House, and Trump’s comments as a presidential candidate praising the former KGB spy.

Trump and Putin first met at the G20 during a gathering of other leaders, which was shown in a video. They later held the bilateral meeting, which was attended briefly by a pool of reporters.

In the evening, both men attended a dinner with G20 leaders. Putin was seated next to U.S. first lady Melania Trump. The U.S. president went over to them at the conclusion of the dinner and visited with Putin, the official said. That conversation had not been previously disclosed.

“There was no ‘second meeting’ between President Trump and President Putin, just a brief conversation at the end of a dinner. The insinuation that the White House has tried to ‘hide’ a second meeting is false, malicious and absurd,” the official said.

In a tweet late on Tuesday, Trump said: “Fake News story of secret dinner with Putin is “sick.” All G 20 leaders, and spouses, were invited by the Chancellor of Germany. Press knew!”

News of the conversation, first reported by Ian Bremmer, the president of political risk consultancy Eurasia Group, could raise renewed concern as Congress and a special counsel investigate allegations by U.S. intelligence agencies that Russia interfered to help Trump, a Republican, win the presidency.

Trump says there was no collusion and Russia denies interference in the election.

Bremmer said Trump got up from his seat halfway through dinner and spent about an hour talking “privately and animatedly” with Putin, “joined only by Putin’s own translator.”

The lack of a U.S. translator raised eyebrows among other leaders at the dinner, said Bremmer, who called it a “breach of national security protocol.”

The White House official said the leaders and their spouses were only permitted to have one translator attend the dinner. Trump sat next to Japanese Prime Minister Shinzo Abe’s wife. His translator spoke Japanese.

“When President Trump spoke to President Putin, the two leaders used the Russian translator, since the American translator did not speak Russian,” the official said.

A U.S. official who was briefed by some of his counterparts about the encounter said some of the leaders who attended the dinner were surprised to see Trump leave his seat and engage Putin in an extended private conversation with no one else from the U.S. side present.

“No one is sure what their discussion was about, and whether it was purely social or touched on bilateral or international issues,” the official said.

As part of the investigations into allegations of Moscow’s meddling, a congressional panel said on Tuesday it wanted to interview Trump’s eldest son, his former campaign chairman and all others who were at a June 2016 meeting with Russian nationals.

The meeting in Trump Tower in New York has grabbed the spotlight in the saga of possible collusion between Moscow and Trump’s campaign as media reports of more participants than originally known have emerged.

Donald Trump Jr., who runs the Trump Organization family business, released emails last week in which he eagerly agreed to meet a woman he was told was a Russian government lawyer who might have damaging information about Democratic election rival Hillary Clinton as part of Moscow’s official support for his father’s campaign.

“Any intelligence out there that suggests that somebody is of interest to us, we have to pursue it,” the U.S. Senate Intelligence Committee chairman, Republican Senator Richard Burr, told reporters.

On July 10, Trump Jr. posted on Twitter: “Happy to work with the committee to pass on what I know.”

A man who works for a Moscow-based developer with ties to Trump was identified on Tuesday as the eighth person to attend the Trump Tower meeting.

Lawyer Scott Balber confirmed Ike Kaveladze’s name to Reuters after CNN reported that his client had been identified by special counsel Robert Mueller’s prosecutors and was cooperating in their investigation.

Balber represented Trump in the New York businessman’s 2013 lawsuit against comedian and television host Bill Maher, demanding the $5 million Maher offered to give to charity if Trump could prove his father was not an orangutan.

Kaveladze’s LinkedIn profile identifies him as vice president of Crocus Group, a company run by Moscow-based developers Aras Agalarov and his son, Emin, an Azerbaijani-Russian pop star. The two have ties to the Trump family and helped set up last year’s meeting between Trump Jr. and Russian lawyer Natalia Veselnitskaya.

Kaveladze was asked to go to the meeting with the understanding he would be a translator for Veselnitskaya, only to find she had brought her own translator with her, Balber told CNN. Balber said he also represented the Agalarovs. Balber said Mueller’s investigators had not interviewed his client or made contact about the Agalarovs.

Separately, the White House said on Tuesday that Trump had nominated Jon Huntsman, a former Utah governor and envoy to China under former Democratic President Barack Obama, as U.S. ambassador to Russia.