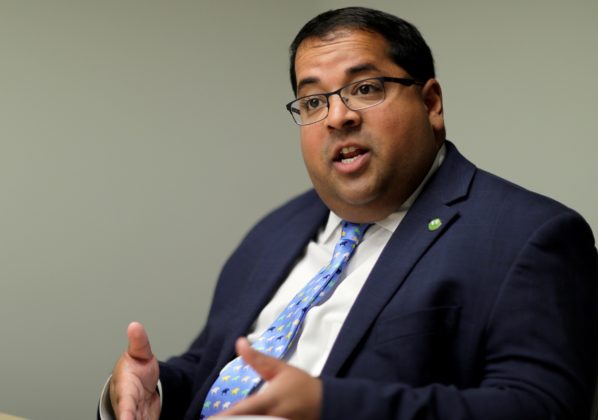 WASHINGTON (Reuters) – President Donald Trump demoted Neil Chatterjee, the Republican head of an energy regulation panel, after he promoted the use of carbon markets by U.S. states to curb climate change.

Trump replaced Chatterjee, who had been chairman of the Federal Energy Regulatory Commission, or FERC, with fellow Republican James Danly, who had been a commissioner, Chatterjee said on Twitter late Thursday.

If Joe Biden becomes president it is likely he would quickly name a Democratic FERC chair.

Last month Chatterjee had promoted putting a price on carbon emissions, an idea backed by many former Republican politicians and leading companies as a way to lower emissions of pollutants scientists say are warming the planet.

Carbon pricing has struggled to gain support in the U.S. Congress and in the administration of Trump, who doubts climate science and wants to cut costs on coal, oil and natural gas.

In a proposed policy statement on Oct. 15 Chatterjee said that carbon pricing by U.S. states is an “important market-based tool that has wide support from across sectors.” He also held a conference exploring how a carbon tax would world in power markets.

Josh Price, an analyst at Height Capital Markets, said in a note to clients that the proposed blessing for state-led carbon pricing schemes was a “direct threat to coal.”

Chatterjee’s term was due to end on June 30, and he said he would serve out the rest of that as a commissioner. He once worked on pro-fossil-fuel policies as an aide to Senate Majority Leader Mitch McConnell of coal-producing Kentucky.

FERC, an independent panel of the Energy Department, regulates the transmission of electricity and natural gas across states and reviews large energy projects.

Chatterjee told the Washington Examiner that his demotion was “perhaps” because he has supported carbon markets and that if the demotion was retribution, he was proud of his independence.

Danly said in a statement that Chatterjee had left his mark on FERC by brokering an agreement on terminals for natural gas exports and taking other actions to help “secure our American energy independence.”

(Reporting by Timothy Gardner in Washington; Editing by Matthew Lewis and Cynthia Osterman)