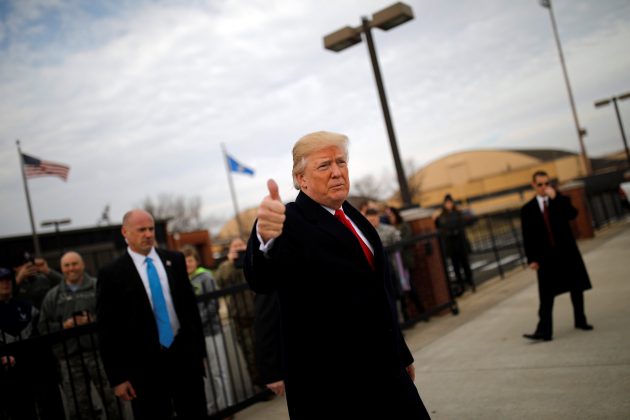 U.S. President Donald Trump gives a thumbs-up to reporters as he boards Air Force One for travel to Palm Beach from Joint Base Andrews, Maryland, U.S., December 22, 2017. REUTERS/Carlos Barria

WASHINGTON (Reuters) – U.S. President Donald Trump on Thursday said he was “very disappointed that China is allowing oil to go into North Korea” and that such moves would prevent “a friendly solution” to the crisis over Pyongyang’s nuclear program.

“Caught RED HANDED – very disappointed that China is allowing oil to go into North Korea. There will never be a friendly solution to the North Korea problem if this continues to happen!” Trump wrote in a post on Twitter.

China earlier on Thursday said there had been no U.N. sanction-breaking oil sales by Chinese ships to North Korea after a South Korea newspaper said Chinese and North Korean vessels had been illicitly linking up at sea to get oil to North Korea.