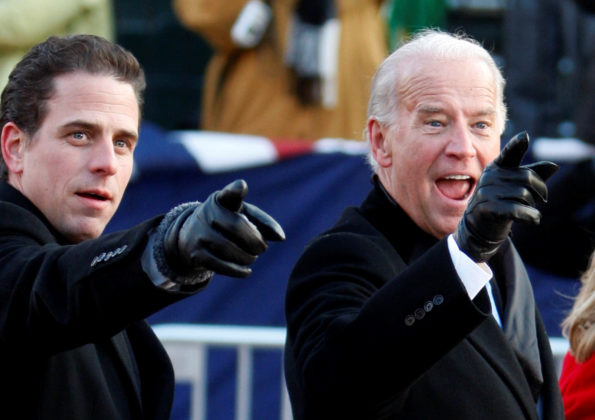 FILE PHOTO: U.S. Vice President Joe Biden (R) points to some faces in the crowd with his son Hunter as they walk down Pennsylvania Avenue following the inauguration ceremony of President Barack Obama in Washington, January 20, 2009. REUTERS/Carlos Barria/File Photo

WASHINGTON (Reuters) – President Donald Trump said on Thursday that he had nothing to do with any potential prosecution of Joe Biden’s son, Hunter, who has disclosed that his taxes are being investigated by a federal prosecutor in Delaware.

“I have NOTHING to do with the potential prosecution of Hunter Biden, or the Biden family. It is just more Fake News. Actually, I find it very sad to watch!” the Republican president wrote on Twitter.

His Twitter post came a day after Jeffrey Rosen, the incoming acting attorney general, declined to say in an interview with Reuters whether or not he would appoint a special counsel to investigate Hunter Biden and his foreign business dealings.

Hunter Biden on Dec. 9 disclosed that his tax affairs were under investigation by the U.S. attorney’s office in Delaware, part of the Justice Department.

A person familiar with the matter told Reuters that the investigation has been ongoing for at least two years, but Attorney General William Barr managed to keep it under wraps ahead of the 2020 election.

An attorney for Hunter Biden could not immediately be reached for comment.

Among the most active in urging a criminal investigation into the Biden family has been Rudolph Giuliani. Barr set up a special intake process at the Justice Department to vet and investigate tips related to Ukraine, including evidence that Giuliani had gathered.

Giuliani and his attorney Robert Costello were invited on Jan. 29 to the FBI field office in Pittsburgh to meet with Scott Brady, the region’s U.S. attorney, and several other prosecutors and FBI agents to present evidence they had collected concerning Hunter Biden, Costello told Reuters in an interview this month.

“They had two FBI agents taking notes on their laptops,” Costello said, noting that Giuliani “did the vast majority of the speaking.”

Costello added that since that meeting, the top assistant in Brady’s office and he had followed up somewhere between six and 10 times.

It is unclear exactly what became of the information once it was handed to Brady’s office, and whether it was forwarded to the prosecutors in Delaware who are handling the Hunter Biden investigation.