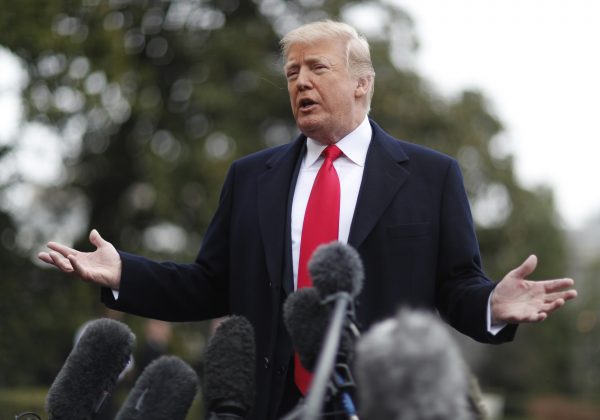 By Christine Kim and Steve Holland

SEOUL/WASHINGTON (Reuters) – U.S. President Donald Trump said on Friday the United States would launch the “largest-ever” package of sanctions against North Korea, intensifying pressure on the reclusive country to giving up its nuclear and missile programs.

“Today I am announcing that we are launching the largest-ever set of new sanctions on the North Korean regime,” Trump said in excerpts of a speech he was to deliver on Friday.

He said the Treasury Department soon will be taking action to further cut off sources of revenue and fuel that North Korea uses to fund its nuclear program and sustain its military.”

He said the effort will target more than 50 “vessels, shipping companies and trade businesses that are assisting North Korea in evading sanctions.

North Korea’s missile and nuclear program, which is seeking to develop a nuclear-tipped missile capable of reaching the U.S. mainland, is the Trump administration’s biggest national security challenge. Trump and North Korean leader Kim Jong Un have taunted each other through the media and Trump has threatened him with “fire and fury like the world has never seen.”

Tougher sanctions may jeopardize the latest detente between the two Koreas, illustrated by the North’s participation in the Winter Olympics in the South, amid preparations for talks about a possible summit between North Korean leader Kim Jong Un and South Korean President Moon Jae-in.

U.S. Vice President Mike Pence had hinted at such a sanctions package two weeks ago during a stop in Tokyo that preceded his visit to South Korea for the Pyeongchang Olympics.

It has been more than two months since North Korea’s last missile test.

Kim said he wants to boost the “warm climate of reconciliation and dialogue” with South Korea, which hosts 28,500 U.S. troops, after a high-level delegation, including his sister, returned from the Olympics.

In an extension of that rapprochement, the North agreed on Friday to hold working-level talks on Tuesday for the Pyeongchang Winter Paralympics on the North’s side of the border village of Panmunjom.

The new U.S. sanctions will be announced while Trump’s daughter, Ivanka, is visiting South Korea. She had dinner with Moon after a closed-door meeting with the president.

“We are very, very excited to attend the 2018 winter Olympic games to cheer for Team USA and to reaffirm our strong and enduring commitment with the people of the Republic of Korea,” Ivanka, a senior White House adviser who has a long been a close confidante of her father’s, said at Incheon airport.

Ivanka Trump’s visit to South Korea coincides with that of a sanctioned North Korean official, Kim Yong Chol, blamed for the deadly 2010 sinking of a South Korean navy ship that killed 46 sailors. His delegation will attend the closing ceremony and also meet Moon.

The South Korean president said South Korea cannot acknowledge North Korea as a nuclear state and talks with the North on denuclearization and improving inter-Korean relations must go hand in hand, Moon’s spokesman, Yoon Young-chan, said at a news conference.

He said close cooperation between the United States and South Korea is important for the talks.

“President Moon also said out of all countries, South Korea has the strongest will to say it cannot acknowledge North Korea as a nuclear state,” he said.

Moon made the comments to Ivanka.

The Blue House has said there are no official opportunities for U.S. and North Korean officials to meet.

Kim Yong Chol is the vice chairman of the North’s ruling Workers’ Party’s Central Committee and was previously chief of the Reconnaissance General Bureau, a top North Korean military intelligence agency that South Korea blamed for the sinking of its navy corvette, the Cheonan. North Korea has denied any involvement.

Seoul said it approved the pending visit by Kim Yong Chol in the pursuit of peace and asked for public understanding in the face of opposition protests.

“Under current difficult circumstances, we have decided to focus on whether peace on the Korean peninsula and improvement in inter-Korean relations can be derived from dialogue with (the visiting North Korean officials), not on their past or who they are,” said Unification Ministry spokesman Baik Tae-hyun in a media briefing.

South Korea’s decision on Thursday to allow in Kim Yong Chol, currently sanctioned by the United States and South Korea, sparked protest from family members of the dead sailors and opposition parties.

Many have been angered at the North’s participation at the Games, which they say has been a reward for bad behavior with no quid pro quo from Pyongyang.

(Reporting by Christine Kim in SEOUL and Steve Holland in WASHINGTON; Editing by Nick Macfie and Bill Trott)