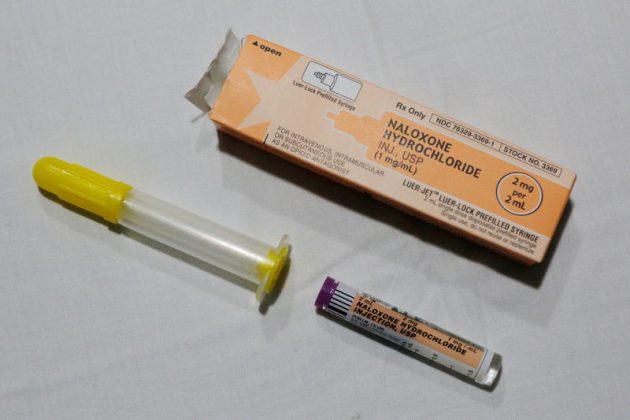 BRIDGEWATER, N.J. (Reuters) – President Donald Trump promised to win the fight against a U.S. epidemic of opioid drug use, but offered no new steps to do so and did not act on a recommendation made by a presidential commission that he declare a national emergency.

Trump spoke at an event he had billed as a “major briefing” on the opioid crisis during a two-week “working vacation” at his private golf club in New Jersey. He also used the appearance to unexpectedly issue a stern warning to North Korea over its threats to the United States.

The Republican president said the United States has no alternative but to stem spreading opioid use, but more than six months into his presidency announced no new policies to combat a public health crisis that kills more than 100 Americans daily.

“I’m confidant that by working with our healthcare and law enforcement experts we will fight this deadly epidemic and the United States will win,” Trump told reporters. “We’re also very, very tough on the southern border where much of this comes in, and we’re talking to China, where certain forms of man-made drug comes in, and it is bad.”

U.S. Health and Human Services Secretary Tom Price said the administration was still working to devise “a comprehensive strategy” to be presented to Trump “in the near future.”

A commission created by Trump to study opioid abuse urged him last week to declare a national emergency to address what it called an opioids crisis, framing its death toll in the context of the Sept. 11, 2001, attacks on the United States. An emergency declaration could free up federal resources for the effort.

“The resources that we need or the focus that we need to bring to bear to the opioid crisis at this point can be addressed without the declaration of an emergency, although all things are on the table for the president,” Price told a later news briefing.

According to the U.S. Centers for Disease Control and Prevention, opioids were involved in more than 33,000 U.S. deaths in 2015, the latest year for which data is available, and estimates show the death rate has continued rising.

The commission, headed by Republican New Jersey Governor Chris Christie, recommended steps such as waiving a federal rule that restricts the number of people who can get residential addiction treatment under the Medicaid healthcare program for the poor and disabled.

The commission cited government data showing that since 1999 U.S. opioid overdoses have quadrupled, adding that nearly two thirds of U.S. drug overdoses were linked to opioids such as heroin and the powerful painkillers Percocet, OxyContin and fentanyl.

Speaking alongside Price, White House senior counselor Kellyanne Conway said, “We are a nation that consumes legal and illegal drugs at a very high and alarming rate. The problem is very complicated, and currently we are on the losing side of this war.”

Conway said the crisis cannot be solved overnight, and that “most of the great work is being done at the state and local levels.” Conway called it a “nonpartisan issue in search of bipartisan support and bipartisan solutions.”

Even before Trump’s event, the Democratic National Committee slammed him, with spokesman Daniel Wessel saying in a statement: “Trump promised he’d come to the aid of communities ravaged by the opioid epidemic, but so far he’s done nothing for them.”

Trump’s initial federal budget called for a 2 percent increase in drug treatment programs and would provide funds to increase border security to stop the flow of drugs into the country.

Substance abuse treatment activists have criticized his proposed cuts to federal prevention and research programs as well as his calls to shrink Medicaid, which covers drug treatment for hundreds of thousands of Americans.

The lawsuit followed similar ones against Purdue and other drugmakers by Oklahoma, Mississippi, Ohio and Missouri and several cities and counties in California, Illinois, Ohio, Oregon, Tennessee and New York.

Price said Trump’s administration was taking no position on such suits.