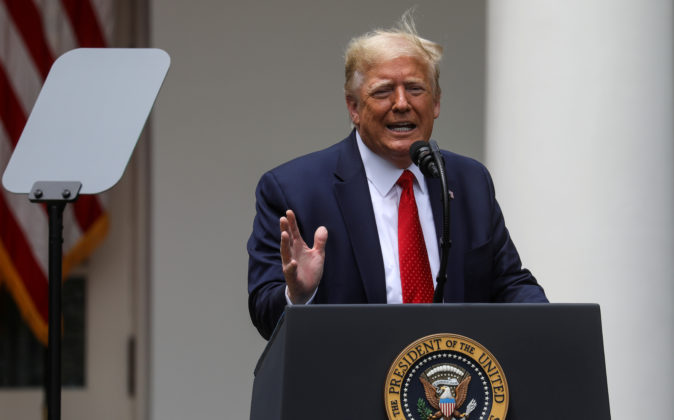 FILE PHOTO: U.S. President Donald Trump speaks prior to signing an executive order on police reform at a ceremony in the Rose Garden at the White House in Washington, U.S., June 16, 2020. REUTERS/Leah Millis

WASHINGTON (Reuters) – President Donald Trump on Friday said his administration will make a filing on “Dreamer” immigrants who are in the United States illegally but entered as children, without providing details, to address the Supreme Court’s ruling he broke federal procedure law in ending a program shielding them from deportation.

“The Supreme Court asked us to resubmit on DACA, nothing was lost or won. They ‘punted’, much like in a football game (where hopefully they would stand for our great American Flag). We will be submitting enhanced papers shortly in order to properly fulfil[l] the Supreme Court’s ruling & request of yesterday,” Trump wrote on Twitter, referring to the Deferred Action for Childhood Arrivals policy.

Trump did not explain what he meant by “enhanced papers.” The highest court in the country left the door open for Trump to attempt again to rescind the program, ruling only that the administration had not met a procedural requirement and its actions were “arbitrary and capricious” under a federal law called the Administrative Procedure Act.

Ken Cuccinelli, the Department of Homeland Security acting deputy secretary, on Friday said the department would “move as quickly as possible” to present Trump with various executive options he could take.

“That still leaves open the appropriate solution, which the Supreme Court mentioned, and that is that Congress step up to the plate,” he told Fox News in an interview shortly before Trump’s tweet.