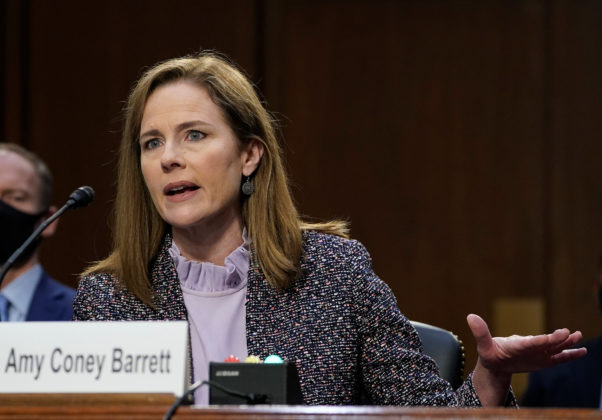 WASHINGTON (Reuters) – President Donald Trump’s Supreme Court nominee Amy Coney Barrett faced fresh questioning at her Senate confirmation hearing on Wednesday, with the panel’s Republican chairman lauding her as “unashamedly pro-life” even as Democrats worry that she could vote to overturn the 1973 ruling legalizing abortion nationwide.

Barrett, a conservative federal appellate judge who is the Republican president’s third selection for a lifetime job on the top U.S. judicial body, was in the third day of her four-day Senate Judiciary Committee confirmation hearing.

“This is history being made folks,” Senator Lindsey Graham, the chairman of the panel, said. “This is the first time in American history that we’ve nominated a woman who is unashamedly pro-life and embraces her faith without apology, and she’s going to the court. A seat at the table is waiting for you.”

“It will be a great signal to all young women who share your view of the world,” Graham added.

Under questioning by Graham, Barrett reiterated her comments from Tuesday that the landmark 1973 Roe v. Wade ruling that recognized a woman’s constitutional right to abortion was not a “super-precedent” that could never potentially be overturned.

Barrett, a devout Catholic and a favorite of religious conservatives, told the committee on Tuesday she could set aside her religious beliefs in making judicial decisions.

Barrett would be the fifth woman to serve on the court and the second Republican appointee.

During 11 hours of questioning on Tuesday, she sidestepped questions on contentious social issues and told the committee she had no agenda on issues such as the Affordable Care Act, popularly known as Obamacare. Democrats say Barrett’s confirmation would threaten healthcare for millions of Americans and they have said the Senate should not consider filling the vacancy until after the presidential election.

Barrett, 48, would tilt the court even further to the right, giving conservative justices a 6-3 majority. Republicans have a 53-47 Senate majority, making Barrett’s confirmation a virtual certainty.

Barrett has declined to say whether she would recuse herself from the major Obamacare case to be argued on Nov. 10, in which Trump and Republican-led states are seeking to invalidate the law. She said the case centers on a different legal issue than two previous Supreme Court rulings that upheld Obamacare that she has criticized.

In response to Democratic suggestions that she would vote to strike the entire law down if one part is found to be unlawful, Barrett on Wednesday told Graham that when judges address the legal question raised in the case, the “presumption” is that Congress did not intend the whole statute to fall.

Barrett agreed with Graham that if a statute can be saved, it is a judge’s duty to do so. Barrett indicated she was in favor of a broad reading of the “severability doctrine” in which courts assume that when one provision of a law is unlawful, Congress would want the rest of the statute to remain in place.

“I think insofar as it tries to effectuate what Congress would have wanted, it’s the court and Congress working hand in hand,” Barrett said of the doctrine.

Barrett on Tuesday also refused to say whether the 2015 ruling legalizing gay marriage nationwide was wrongly decided. Barrett deflected Democrats’ questions about whether she would participate in any dispute resulting from the Nov. 3 presidential election, promising only to follow rules giving justices the final say on recusal.

Trump has urged the Senate, controlled by his fellow Republicans, to confirm Barrett before Election Day. Trump has said he expects the Supreme Court to decide the election’s outcome as he faces Democratic challenger Joe Biden.

The hearing is scheduled to end on Thursday with testimony from outside witnesses, with Republicans already preparing for committee vote next week.

Trump nominated Barrett to a lifetime post on the court on Sept. 26 to replace the late liberal Justice Ruth Bader Ginsburg. The four-day confirmation hearing is a key step before a full Senate vote due by the end of October on Barrett’s confirmation.

(Reporting by Andrew Chung in New York and Lawrence Hurley and Patricia Zengerle in Washington; Editing by Will Dunham)