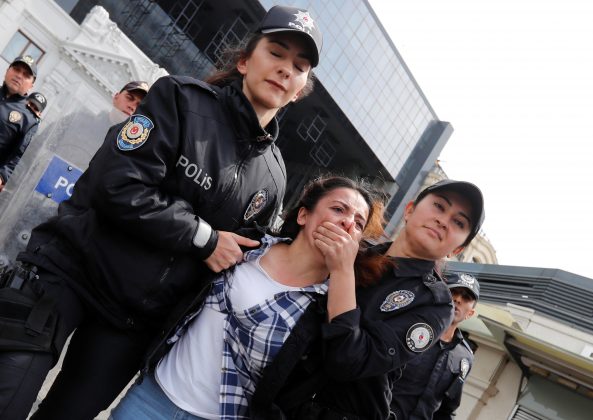 Police detain a protester after marching on Taksim Square to celebrate May Day in Istanbul, Turkey May 1, 2019. REUTERS/Murad Sezer

ISTANBUL (Reuters) – Istanbul police said they detained 127 people on Wednesday for attempting to hold illegal demonstrations in various parts of the city to celebrate May Day.

Police had cordoned off Istanbul’s central Taksim square, but small groups of demonstrators converged on it anyway.

“Squares belong to the people, they cannot be closed off. Long live May 1,” protesters yelled there, as police hauled them away, covering their mouths to stop them chanting.

Protests for May Day, the international workers’ holiday, are an annual occurrence in Turkey and have in the past been characterized by police action against demonstrators. Protests have often centered on Taksim square where 34 people were killed during demonstrations on May 1, 1977.

Earlier in the day, police had allowed a ceremony by union leaders to be held at Taksim Square, and another group laid carnations on a street nearby.

Authorities allowed celebrations to be held in the Bakirkoy district, which is located some distance from the city center.

By 1300 GMT, Istanbul police said they had detained 127 demonstrators in various parts of the city, including the central districts of Besiktas, Sisli and Beyoglu.

In Besiktas a small group of protesters spontaneously began shouting slogans and waving red flags of the leftist People’s Libration Party (HKP). Footage from the scene showed police scuffling with protesters, rounding some of them up and putting them in police vans.

Ozgur Karabulut, general manager of Dev Yapi-Is Union, said the celebrations were continuing smoothly in Bakirkoy, with participants from all parts of society.