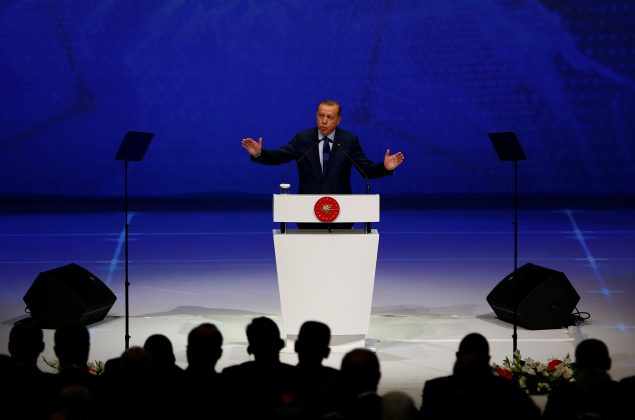 By Ece Toksabay and David Dolan

ISTANBUL (Reuters) – Turkey warned Greek Cypriots on Friday not to make a grab for energy reserves around the divided island and President Tayyip Erdogan told oil companies to be careful they did not lose a “friend” by joining in.

Talks to reunite the ethnic Greek and Turkish sides of Cyprus collapsed in anger and recrimination in the early hours of Friday, ending a process many saw as the most promising in generations to heal decades of conflict.

It was a clear reference to plans by the internationally recognized Greek Cypriot government to exploit potential hydrocarbon deposits around the Mediterranean island.

The government has already issues a maritime advisory for a natural gas drill from July to October.

“We want to remind once again that the hydrocarbon resources around Cyprus belongs to both sides,” Yildirim said.

“The Greek Cypriot leadership must seek a constructive approach rather than setting an obstacle for peace. We advise that they refrain from unilateral measures in the east Mediterranean.”

Erdogan, speaking later at the same conference, went further, with a not-very-veiled threat to oil companies who may be tempted to participate in the Greek Cypriots’ plans.

“It is impossible to appreciate that some energy companies are acting with, and becoming part of some irresponsible measures taken by, Greek Cypriots,” Erdogan said. “I want to remind them that they could lose a friend like Turkey.”

Greek Cypriots say it is its sovereign right to explore for hydrocarbons, and it has signed maritime delimitation agreements with most of its neighbors.

Asked on Sunday if there was any pressure on Cyprus regarding the drilling schedule, Cypriot President Nicos Anastasiades said: “Nothing (pressure) is being applied, nor will there be a postponement.”

A number of energy companies have already beaten a path to the island.

A drilling ship contracted by Total, the West Capella, is already heading for Cyprus.

“What we expect from anyone who takes sides in the developments in Cyprus is that they should refrain from steps that might pave the way for new tensions in the region,” Erdogan said.

Asked by Reuters at the petroleum conference whether the company was worried that drilling could alienate Turkey, Arnaud Breuillac, Total’s president of exploration and production, said the company had “no concerns”.

The issue has risen to the fore again because of the failure of the latest round of reunification talks, which were started in part to try to solve the energy issue.

A week of United Nations-mediated talks in the Swiss Alps culminated in a “yelling and drama” session, leaving the conflict unresolved.

Cyprus’s Greek and Turkish Cypriots have lived estranged since a Turkish invasion in 1974 triggered by a brief Greek- inspired coup.

Turkey has 30,000 troops stationed in northern Cyprus and their status in any post-settlement peace deal proved to be the undoing of a process one diplomat lamented came “so, so close” to succeeding.

Cyprus talks have collapsed before, most spectacularly in 2004, when Greek Cypriots rejected a U.N. reunification blueprint in a referendum while Turkish Cypriots backed it. It took several years for the United Nations to re-engage.