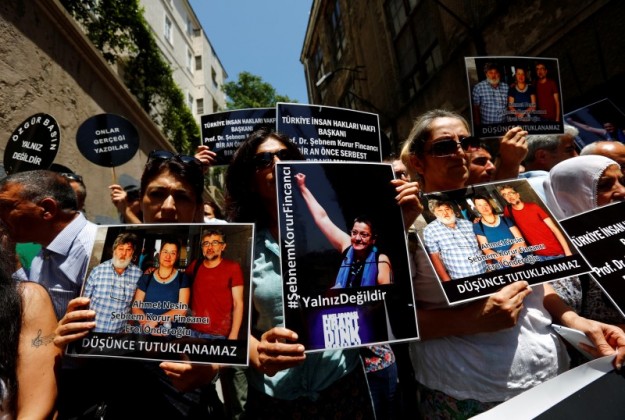 Demonstrators hold pictures of Ahmet Nesin, Sebnem Korur Fincanci and Erol Onderoglu during a protest against arrest of the three prominent campaigners for press freedom, in front of the pro-Kurdish Ozgur Gundem newspaper in central Istanbul, Turkey, June 21, 2016. REUTERS/Murad Sezer

ISTANBUL (Reuters) – Supporters of a pro-Kurdish newspaper on Tuesday protested against the arrest of three prominent activists facing terrorism charges in Turkey and said the government was tightening its grip on independent media in a case being watched by the European Union.

The three had joined a “solidarity campaign” with nearly 50 other journalists to guest-edit the paper for a day each. Ozgur Gundem focuses on the Kurdish conflict and has faced dozens of investigations, fines and the arrest of a dozen correspondents since 2014. Other guest editors are also being investigated or prosecuted on terrorism-related charges.

“The court, directed by the palace and acting on its orders, once again has signed its name to a shameful decision and arrested our three friends,” editor Inan Kizilkaya said, referring to President Tayyip Erdogan’s office.

The presidency said it would not comment on court cases.

The arrests are a headache for the European Union, trying to keep a deal with Turkey on track to stop the flow of migrants to Europe, despite criticism from rights groups and concern from some European leaders about Turkey’s record on rights.

The EU, which Turkey seeks to join, said the arrests violated Ankara’s commitment to fundamental rights.

Turkey ranks 151 out of 180 nations on RSF’s World Press Freedom Index. It accuses Erdogan, Turkey’s most popular leader in a half-century, of an “offensive against Turkey’s media” that includes censorship and harassment.

“The jailing of Onderoglu and (Fincanci), two of Turkey’s most respected rights defenders, is a chilling sign human rights groups are the next target,” said Hugh Williamson, Europe and Central Asia director at Human Rights Watch.

Erdogan has vowed to stamp out a three-decade insurgency by Kurdistan Workers Party (PKK) militants that flared anew a year ago after peace talks he spearheaded collapsed.

Left-wing Ozgur Gundem, which has a circulation of 7,500, has featured the writings of Abdullah Ocalan, the PKK’s jailed leader, and has published columns by senior rebel commanders. Turkey, the U.S. and EU list the PKK as a terrorist group.

The Index on Censorship says 20 journalists have been detained in Turkey this year. Most are Kurds working in the strife-hit southeast.

“The West, with its entire focus on the refugee crisis, has paved the way for Erdogan’s authoritarianism,” said Garo Paylan, a lawmaker in the Democratic Peoples’ Party (HDP), which has Kurdish roots and is the third biggest party in parliament.

Can Dundar, editor-in-chief of the secularist Cumhuriyet newspaper which is often at odds with Ozgur Gundem’s pro-Kurdish stance, on Tuesday took on the symbolic role of editor-in-chief.

Dundar was jailed for five years last month over coverage of alleged Turkish arms shipments to Syrian rebels, but is free pending appeal. He is aware he could be prosecuted again after his stint at the helm of Ozgur Gundem.

“If we don’t stand together, we will all lose. The time is now to support each other,” he told Reuters.