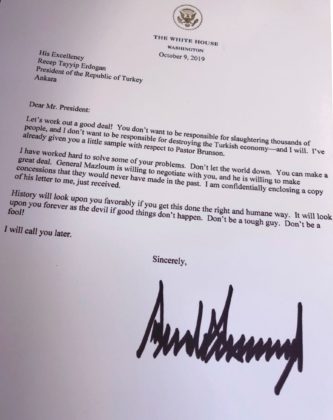 ANKARA (Reuters) – President Tayyip Erdogan may call off a visit to Washington next week in protest at votes in the House of Representatives to recognize mass killings of Armenians a century ago as genocide and to seek sanctions on Turkey, three Turkish officials said.

Erdogan is due in Washington on Nov. 13 at President Donald Trump’s invitation, but said last week that the votes put a “question mark” over the plans.

“These steps seriously overshadow ties between the two countries. Due to these decisions, Erdogan’s visit has been put on hold,” a senior Turkish official said, adding that a final decision had not been taken.

Turkish sources say Trump and Erdogan have a strong bond despite anger in Congress over Turkey’s Syria offensive and its purchase of Russian air defenses, and despite what Ankara sees as Trump’s own erratic pronouncements.

Those personal ties could be crucial given NATO member Turkey’s purchase of Moscow’s S-400 missile defense system, which under U.S. law should trigger sanctions.

Turkey is already suspended from the F-35 fighter jet program in which it was both joint producer and customer, and the offensive it launched against Kurdish forces in northeast Syria on Oct. 9 set the stage for further U.S. retaliation.

Although Trump appeared to clear the way for the incursion by withdrawing troops, the White House briefly imposed sanctions before lifting them after a deal to halt the fighting and clear the Kurdish fighters from the border.

Then, two weeks after that deal, the Congressional votes infuriated Turkey once more.

Turkey accepts that many Armenians living in the Ottoman Empire were killed in clashes with Ottoman forces during World War One, but contests the figures and denies that the killings were orchestrated or constitute genocide.

“They took advantage of the current political climate against Turkey in Washington to pass this resolution,” a source close to the presidency said. Like the other officials, he spoke on condition of anonymity.

Trump has expressed sympathy for Turkey over its purchase of Russian defense systems, blaming his predecessor for not selling Ankara U.S. Patriot missiles. His eagerness to pull U.S. forces out of Syria also aligned with Erdogan’s plan to send troops across the border to drive back the Kurdish YPG.

However, last month Trump threatened to “obliterate” Turkey’s economy, and Trump sent Erdogan a letter on the day the offensive started warning him he could be responsible for “slaughtering thousands of people”.

A Turkish security official cited Trump’s letter, along with the votes in Congress, as damaging: “If the atmosphere doesn’t change, there won’t be any point to this visit”.

Erdogan himself said three weeks ago he could no longer keep up with Trump’s blizzard of tweets.

Still, for Ankara, Trump remains the best hope of salvaging a partnership between two countries that, despite their difficulties, want to quadruple their annual trade to $100 billion.

“The two leaders have a good relationship,” the source close to the presidency said. “President Trump wants to have good relations with Turkey in spite of his own establishment.”