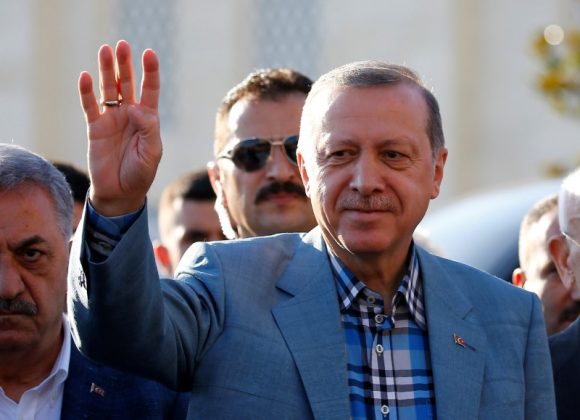 Turkey's President Tayyip Erdogan greets his supporters as he leaves a mosque after the Eid al-Fitr prayers in Istanbul, Turkey, June 25, 2017. REUTERS/Murad Sezer

ISTANBUL (Reuters) – President Tayyip Erdogan on Sunday dismissed calls for Turkey to close a military base in Qatar and said a wider list of demands issued by four Arab states was an unlawful intervention against the Gulf state’s sovereignty.

In his strongest statement of support for Qatar in the nearly three-week-old crisis centered on the Gulf state, Erdogan said the call to withdraw Turkish forces was disrespectful and that Doha – which described the demands as unreasonable – was taking the right approach.

Saudi Arabia, the United Arab Emirates, Egypt and Bahrain imposed a boycott on June 5 on Qatar and issued 13 demands including closing Al Jazeera television, curbing relations with Iran, shutting the Turkish base and paying reparations.

“We approve and appreciate the attitude of Qatar against the list of 13 demands,” Erdogan, speaking outside a mosque in Istanbul, said. “…This approach of 13 demands is against international law because you cannot attack or intervene in the sovereignty of a country.”

Bahrain’s foreign minister said on Sunday that outside interference would not solve the problem.

“It is in the interest of these powers to respect the existing regional order which is capable of solving any issue that may arise,” Sheikh Khalid bin Ahmed al-Khalifa said in a message on Twitter, without naming Turkey.

The 13 demands are apparently aimed at dismantling Qatar’s interventionist foreign policy which has incensed conservative Arab peers over its alleged support for Islamists they regard as threats to their dynastic rule.

Qatar along with Turkey, whose ruling AK Party has its roots in Islamist politics, backed a Muslim Brotherhood government in Egypt before it was overthrown in 2013. The Arab states have demanded Qatar cut any links to the Brotherhood and other groups they deem to be terrorist, ideological or sectarian.

Turkey, the most powerful regional country to stand by Qatar, has sent 100 cargo planes with supplies since its neighbors cut air and sea links. It has also rushed through legislation to send more troops to its base in Doha.

Two contingents of Turkish troops with columns of armored vehicles have arrived since the crisis erupted on June 5, and Defence Minister Fikri Isik said on Friday that further reinforcements would be beneficial.

“The strengthening of the Turkish base would be a positive step in terms of the Gulf’s security,” he said. “Re-evaluating the base agreement with Qatar is not on our agenda.”

Hurriyet newspaper said last week a joint exercise by Turkish and Qatari forces was expected following the Islamic Eid al-Fitr holiday which started on Sunday, and the number of Turkish soldiers sent to the Gulf state could eventually reach 1,000. An air force contingent was also envisaged, it said.

Erdogan said Turkey had also offered to establish a military base in Saudi Arabia, but never received a clear answer.

“If Saudi Arabia wants us to have base there, a step towards this also can be taken,” he told reporters. “I made this offer to the king himself and they said they will consider this.”

Speaking outside the Istanbul mosque after prayers marking the Muslim Eid al-Fitr holiday, Erdogan said he would continue his planned program despite feeling briefly unwell.

“I had a little condition about my blood pressure, related to my diabetes,” he said.