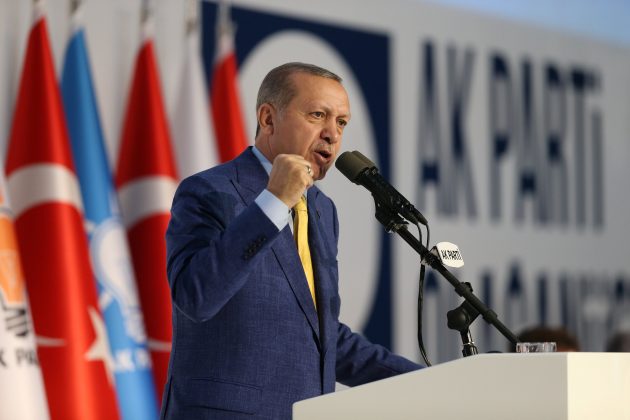 Speaking two days after the attack at a Manchester concert venue which killed 22 people and was claimed by Islamic State, Erdogan said member states of the military alliance must acknowledge they faced the same threats.

Turkey’s relations with NATO ally the United States have been strained by Washington’s decision to arm Kurdish YPG militias who are part of a force preparing to fight for the Islamic State-held city of Raqqa in Syria.

Turkey regards the YPG as an extension of the outlawed Kurdistan Workers Party (PKK), deemed a terrorist organization by the United States, Turkey and the European Union. Washington sees the YPG as distinct from the PKK and as a valuable partner in the fight against Islamic State in Syria.

“Terrorism is not the problem of a single country but it is a global issue. Global problems can only be solved through global cooperation,” Erdogan told a news conference in Ankara before heading to Brussels for a NATO summit on Thursday.

“We still see the distinctions of ‘my terrorist, your terrorist’. We have to move away from this.”

“The antidote of terrorism is solidarity,” Erdogan said. “Instant sharing is obligatory in terms of intelligence. In this environment, it is compulsory that NATO is more active and it specifically has to offer more support to allies.”

The Turkish president will also have a potentially tense meeting in Brussels on Thursday with European Commission President Jean-Claude Juncker and European Council President Donald Tusk.

Turkey has worked for decades toward a goal of joining the European Union and Erdogan is seeking a Turkey-EU summit to address their future plans. But relations have been frayed by sharp public disputes during the campaign for last month’s referendum which granted Erdogan greater powers.

Erdogan likened German and Dutch leaders to Nazis when Turkish politicians were prevented from campaigning in their countries, and his narrow referendum victory was greeted with little enthusiasm by most EU countries.

“We are not trying to break away from the European Union but the bloc should fulfill its responsibilities (to Turkey),” Erdogan told the news conference, saying the bloc should not view his country “like a beggar”.

“What we will be discussing with them is: ‘What do you want? Why are you still waiting? It’s been 54 years’,” he said, referring to the start of the process in 1963 when Ankara partnered up with the bloc’s then economic union.

“The EU seems to be in a mood as if waiting for Turkey to pull out. And we say, if there is such a situation then you make this decision and we will not make it difficult for you.”

Tensions with the EU have spilled over into NATO. Austria’s call last year for an end to Turkey’s EU accession talks led Ankara to withdraw cooperation from some of the alliance’s training projects. Ankara said the move was aimed at Vienna but NATO officials said other countries were affected.

A separate dispute with the EU’s leading country, Germany, has further clouded relations.

Turkey has refused to allow German parliamentarians access to troops based at the Incirlik air base, which is used by a U.S.-led coalition fighting Islamic State in Syria and Iraq.

On Wednesday, German lawmakers also canceled a visit to Turkey where they had planned to talk to opposition lawmakers, governors and rights groups about the referendum, saying Ankara had refused to give them a security detail.

Berlin has said it is looking for an alternative base for its forces to Incirlik, and that Jordan is an option, but Erdogan said Germany had not made its official position clear.