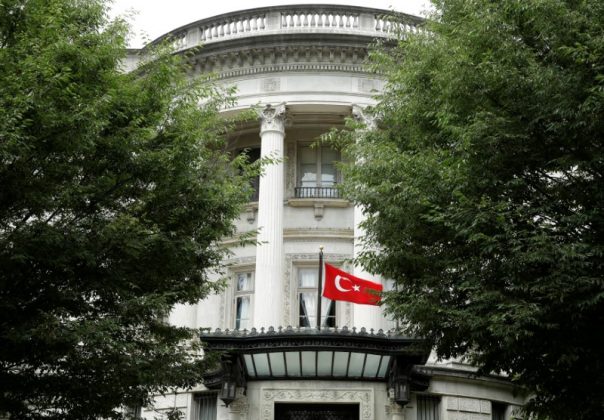 The Turkish flag flies over the the Turkish Ambassador's residence in Washington, U.S., June 15, 2017. REUTERS/Joshua Roberts

WASHINGTON (Reuters) – U.S. prosecutors have charged a dozen Turkish security and police officers with assault after an attack on protesters in Washington during Turkish President Tayyip Erdogan’s visit to the U.S. capital last month, officials said on Thursday.

The May 16 skirmish, caught on video, left nine protesters injured outside the Turkish ambassador’s residence and further strained ties at a time when the NATO allies are in sharp disagreement over policy in Syria.

The charges against some members of Erdogan’s security detail send a clear message that the United States “does not tolerate individuals who use intimidation and violence to stifle freedom of speech and legitimate political expression,” U.S. Secretary of State Rex Tillerson said in a statement.

Turkey condemned the charges and said the Turkish citizens, who left the country with Erdogan, should not be held responsible for the incident.

“This decision taken by U.S. authorities is wrong, biased and lacks legal basis,” Turkey’s Foreign Ministry said in a statement. “The brawl in front of the Turkish ambassador’s residence was caused by the failure of local security authorities to take necessary measures.”

U.S. State Department spokeswoman Heather Nauert would not say on Thursday whether an extradition request would be made.

The security officers are no longer protected by the immunity extended to them during Erdogan’s recent visit, the State Department said.

Washington officials announcing the charges, which were filed in the Superior Court of the District of Columbia, described the treatment of the protesters as an attack on U.S. values. Some of the protesters were associated with the Armenian National Committee of America and accuse Erdogan of running a politically repressive government.

A video posted online showed men in dark suits chasing protesters and punching and kicking them as Washington police struggled to intervene.

“If they attempt to enter the United States, they will be arrested,” Metropolitan Police Department Chief Peter Newsham said of the security officers charged in the case.

Newsham said there was no probable cause to arrest Erdogan, who watched the confrontation unfold from a nearby car.

Eighteen people have now been charged in the incident, including two Canadians and four Americans, according to prosecutors.