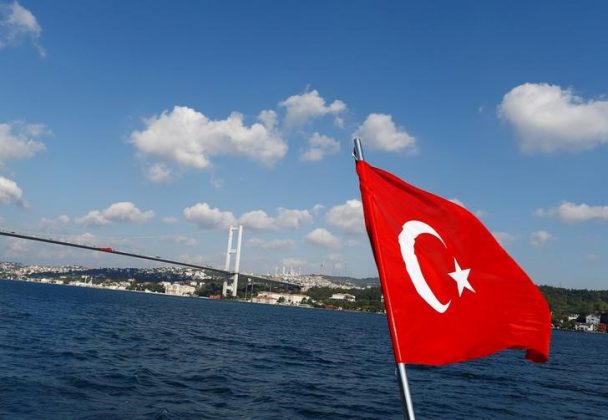 A Turkish flag is pictured on a boat with the Bosphorus bridge in the background in Istanbul, Turkey, August 6, 2016. REUTERS/Osman Orsal

ANKARA (Reuters) – Turkey’s nationalist opposition will seek support from the ruling AK Party to lower a 10 percent threshold to enter parliament, a party official said on Thursday, in a sign that a new rival political party could shake up Turkish politics.

Speaking to reporters in Ankara, MHP Deputy Chairman Semih Yalcin said his party, which could fall below the threshold if Iyi Parti’s apparent early popularity is sustained, would push to lower the barrier.

“The MHP has preparations regarding the (threshold) electoral law, and this will be discussed depending on the offers we receive (from the AK Party),” Yalcin said, a day after MHP leader Devlet Bahceli called the threshold “too harsh”.

Since 1982, political parties in Turkey have needed to win at least 10 percent of votes to be represented in the 550-seat parliament. The country faces presidential and parliamentary elections in 2019.

A recent poll suggested that Aksener’s party could overtake the main opposition secular CHP and push the MHP and pro-Kurdish opposition HDP out of parliament by forcing their share of the vote below the current threshold. It would also cut into the AK Party share of the vote.

The Islamist-rooted AK Party, led by Erdogan, is a broad organization, counting among its ranks nationalists and religious conservatives.

“Will they (Iyi) win 20 percent or one percent? We will see… Everyone will see how they hold up after they stand in front of the people in 2019,” Yalcin said of the Iyi Parti.

The MHP won as much as 18 percent of votes in a 1999 parliamentary election but slipped below the threshold at 9.5 percent in 2002. It has exceeded 10 percent since then.

Under an executive presidential system approved in an April referendum, the president will be given expanded powers. The number of MPs will be increased from 550 to 600, while the parliament’s authority will be reduced.

Critics argue that lowering the threshold, and the resulting change in the composition of parliament, would not have any great impact under the new presidential system.

The AK Party, founded by Erdogan, has dominated Turkish politics since 2002, holding a majority in parliament for 15 years. After winning almost 50 percent of votes in the latest parliamentary elections in 2015, Erdogan and party officials said they aimed to win more than half the votes in 2019.