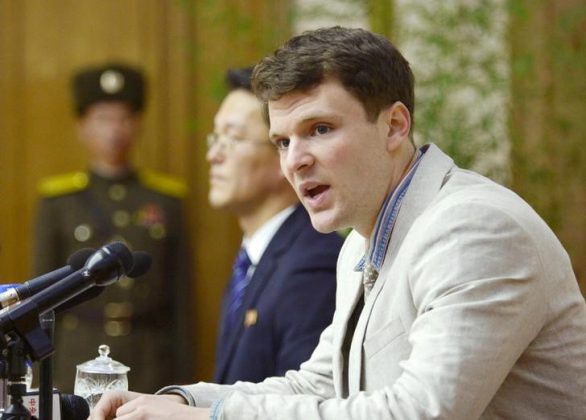 FILE PHOTO - Otto Frederick Warmbier, a University of Virginia student who has been detained in North Korea since early January, attends a news conference in Pyongyang, North Korea, in this photo released by Kyodo February 29, 2016. Mandatory credit REUTERS/Kyodo

GENEVA (Reuters) – A United Nations human rights investigator called on North Korea on Friday to explain why an American student was in a coma when he was returned home this week after more than a year in detention there.

Otto Warmbier, 22, has a severe brain injury and is in a state of “unresponsive wakefulness”, his Ohio doctors said on Thursday.

His family said he had been in a coma since March

2016, shortly after he was sentenced to 15 years’ hard labor

“While I welcome the news of Mr Warmbier’s release, I am very concerned about his condition, and the authorities have to provide a clear explanation about what made him slip into a coma,” Tomas Ojea Quintana, the U.N. special rapporteur on human rights in the Democratic People’s Republic of Korea (DPRK), said in a statement issued in Geneva.

Warmbier, from a Cincinatti suburb, was arrested for trying to steal an item bearing a propaganda slogan, North Korean media reported. On Thursday, North Korea said that it had released him “on humanitarian grounds”.

said his son had been “brutalised and terrorised” by the North Korean government.

Fred Warmbier said the family did not believe North Korea’s

story that his son had fallen into a coma after contracting

botulism and being given a sleeping pill.

Ojea Quintana called on North Korea to “clarify the causes and circumstances” of Otto Warmbier’s release.

“His case serves as a reminder of the disastrous implications of the lack of access to adequate medical treatment for prisoners in the DPRK,” he said.

“His ordeal could have been prevented had he not been denied basic entitlements when he was arrested, such as access to consular officers and representation by an independent legal counsel of his choosing,” added Ojea Quintana, a lawyer and veteran U.N. rights expert.

A 2014 landmark report by a U.N. investigators cataloged massive human rights violations in North Korea which they said could amount to crimes against humanity.

Tens of thousands of people are detained across the isolated country in inhumane conditions and subjected to torture and forced labor, it said.