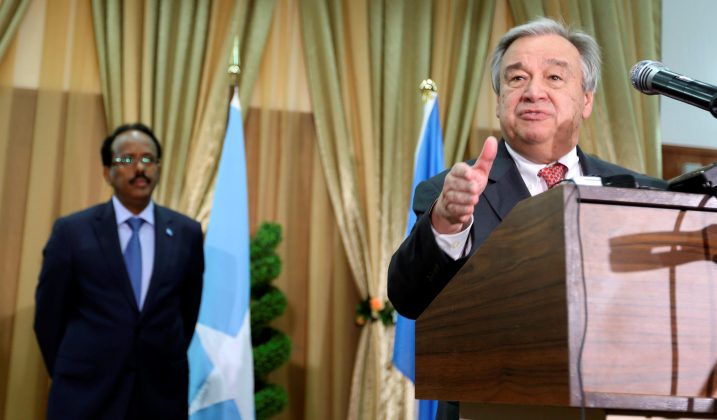 MOGADISHU (Reuters) – Rich countries must do more to stop drought-stricken Somalia from sinking into famine, the head of the United Nations said on Tuesday, warning terrorism would increase without aid.

“If you want to fight terrorism, we need to address the root causes of terrorism. We need to bring peace and stability to a country like Somalia … It’s the best way for rich countries to protect themselves,” U.N. chief Antonio Guterres told a news conference in Mogadishu.

The United Nations is asking for $825 million to provide aid to 6.2 million Somalis, about half the country’s population.

His appeal comes a day after U.S. President Donald Trump signed a revised executive order suspending travel to the United States from six mainly Muslim nations, including Somalia. Trump, who has justified that measure on national security grounds, has also said he will slash budgets for U.S. aid and diplomacy.

Those policies will hit Somalia hard, after more than 25 years of civil war and an ongoing battle between its U.N.-backed government and an Islamist insurgency.

The current drought is threatening to turn into famine, with at least 360,000 Somali children severely malnourished, meaning they need extra food to survive.

“If we don’t have rain in the coming two months this could be a humanitarian crisis that could be the same as we had in 2011, when we lost 260,000 people,” said Somali President Mohamed Abdullahi Mohamed.

Families from rural areas are moving to cities to search for food as animals die and water sources evaporate, forcing many to drink water infected with deadly cholera bacteria.

Asha Mohamed, 18, brought her two young daughters to the capital after the family’s sheep and goats died.

“When we got food, first we fed the children. We would only eat afterwards if there was enough,” she said.

Her neighbor, Medina Mohamed, said she must divide her food to ensure her smallest children and disabled son are fed first.

“The others don’t understand,” she said. “Everyone wants to eat.”

Low rainfall in neighboring Kenya has also left 1.3 million people in need of food aid there, while severe drought prompted water restrictions in South Africa at the end of last year and North Africa faced its worst drought in decades.