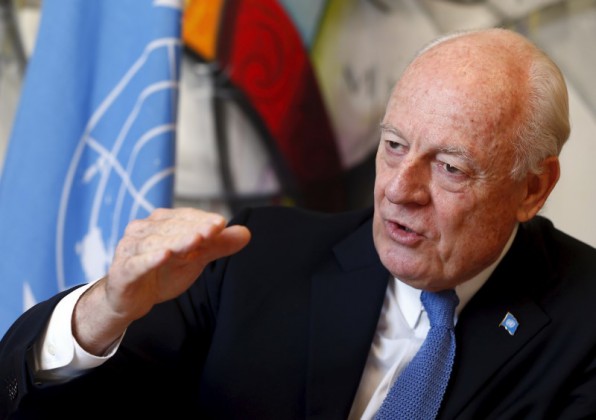 U.N. mediator for Syria Staffan de Mistura talks to Reuters during an interview at the U.N. in Geneva, Switzerland, on March 1, 2016. REUTERS / Ruben Sprich

GENEVA (Reuters) – The United Nations will delay the next round of Syria peace talks by two days to allow the cessation of hostilities in force since Saturday to take hold, U.N. Syria envoy Staffan de Mistura said.

International observers have acknowledged violations of the agreement intended to halt nearly five years of fighting while reporting that the level of violence has decreased considerably.

“We are delaying it to the afternoon of (March) 9th for logistical and technical reasons and also for the ceasefire to better settle down,” de Mistura told Reuters on Tuesday. The talks had been penciled in for March 7.

The cessation of hostilities was “a glimmer of hope”, Syrian President Bashar al-Assad said, although he accused the opposition of violating the agreement.

The opposition in turn says the Syrian government has breached the fragile truce by repeatedly attacking its positions, which the government denies.

“We will play our part to make the whole thing work,” Assad told Germany’s ARD television network, adding that the Syrian army had not reacted to truce violations in order to give the agreement a chance.

“The terrorists have breached the deal from the first day. We as the Syrian army are refraining from responding in order to give a chance to sustain the agreement. But in the end there are limits and it all depends on the other side,” Assad said.

The cessation of hostilities agreement, drawn up by the United States and Russia, is seen by the U.N. as an opportunity to revive peace talks which collapsed before they had even started a month ago in Geneva.

It also hopes the truce will allow humanitarian aid to be sent into besieged areas where manySyrians are living in dire conditions.

However, the opposition said it had yet to be officially informed of a new round of talks on March 9, insisting that no serious discussions can begin before detainees are freed and blockades are lifted.

Riad Nassan Agha, a member of the High Negotiations Committee, told Reuters the opposition would study the call for talks based on developments on the ground, adding that it heard of the March 9 date only through the media.

U.N. Secretary-General Ban Ki-moon and Russian Foreign Minister Sergei Lavrov said there was an urgent need to implement the agreement and for the warring parties to return to the negotiating table, a U.N. statement said.

“They agreed on the importance of urgently moving forward simultaneously on implementing the cessation of hostilities agreement, providing vital humanitarian assistance to civilians, and returning to political negotiations,” the statement said.

U.S. Secretary of State John Kerry said on Monday that while efforts were being made to track down alleged violations of the cessation of hostilities, there was currently no evidence to suggest they would destabilize the fragile peace.

In a telephone conversation on Tuesday, Lavrov and Kerry reaffirmed the importance of coordination, chiefly military, between Moscow and Washington to strengthen the truce, the Russian foreign ministry reported.

De Mistura expected to see attempts to disrupt the ceasefire, saying these needed to be contained to avoid them spreading and undermining the credibility of the truce.

“We don’t want discussions in Geneva to become a discussion about infringements or not of the ceasefire, we want them to actually address the core of everything,” he said in an interview.

De Mistura wants the Syrian sides to focus on constitutional reform, governance, and hopes elections can be held in 18 months. Prisoner releases would also be “very much up front on the agenda”, he said.

Syria‘s Ambassador to the U.N. in Geneva, Hussam Aala, said his government was cooperating over aid deliveries, including to rebel-led areas. It was facilitating “access to humanitarian aid to those who need it without discrimination, between the besieged zones or zones infiltrated by terrorists”.

However, addressing the U.N. Human Rights Council, he also accused Saudi Arabia and Qatar of financing jihadist rebel groups including the Nusra Front, which is linked to al Qaeda, and also rejected criticism from France.

The agreement does not include Islamic State or the Nusra Front, and Assad and his Russian backers have made clear they intend to keep attacking them.

The Saudi-backed “moderate” opposition says that because some of their fighters are in areas alongside Nusra, they fear being targeted too.

The Russian Defence Ministry said it was refraining from striking areas where the “moderate opposition” was respecting the ceasefire agreement, Interfax news agency reported.

A total of 15 ceasefire violations have been registered in Syria in the past 24 hours, Interfax quoted the Russian military as saying. The U.S. State Department, however, said it had not received any reports of “significant” violations.

The Syrian military denied it was responsible for any violations and said “terrorist groups”, the term it uses to describe its enemies, were to blame. Operations against Islamic State – also known as Daesh – and the Nusra Front were going ahead.

“The combat operations that the Syrian Arab Army is carrying out against Daesh and Nusra are continuing according to the plans of the military command,” a Syrian military source said.