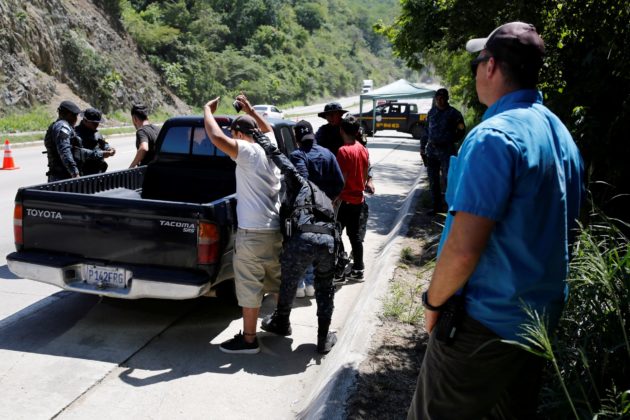 On a recent visit, the Department of Homeland Security (DHS) agents observed from a few feet as Guatemalans stopped all vehicles carrying more than five people.

“The operations are being carried out at strategic points,” said Keneth Morales, a Guatemalan agent. “We have detected migratory flows and illegal traffic.”

However, U.S. agents taking part in the program told Reuters they found shortcomings in their counterparts from the country’s Division of Ports, Airports and Border Posts (Dipafront).

Speaking on condition of anonymity, the agents said many of the Guatemalan officials were unaware of their own immigration laws or lacked basic knowledge about detention techniques, weapons handling and interrogation of undocumented immigrants.

At another checkpoint in Chiquimula, near the border with El Salvador, “people ask us if we are from the DEA (Drug Enforcement Administration) … nobody has explained to them what we are doing here,” said one U.S. official.

The training program aims to instruct an expected 200 Guatemalan police in performing stricter border checks for suspected people-smugglers and in handling detentions and repatriations.

U.S. agents are also training police and anti-narcotics agents in first aid, among other courses.

The U.S. Department Of Homeland Security did not immediately reply to a request for comment on the U.S. trainers’ observations.

Rights groups have argued in recent months that Guatemala, and its neighbors El Salvador and Honduras do not have the institutional capacity to carry out enforcement and asylum work demanded by the administration of U.S. President Donald Trump.

The May security deal, which is initially for two years, was followed by a July agreement to take in more asylum seekers. Honduras and El Salvador later struck similar asylum accords.

The three troubled countries send the highest number of migrants north seeking asylum in the United States, according to data from U.S. Citizenship and Immigration Enforcement. Asylum applications at the U.S.-Mexico border reached a decade-long high in 2018, according to U.S. government data.

Under U.S. supervision, Dipafront officers have installed checkpoints along roads that were last year traveled by thousands of Central American migrants in caravans.

Trump repeatedly lashed out at the caravans and earlier this year, the U.S. government cut aid to Central America after he said the region needed to do more to stop citizens leaving.

Pablo Castillo, a spokesman for Guatemala’s national police, said the agents’ comments presented a “false impression” of Guatemalan officers and put down the U.S. interpretation to differences in procedures and training methods between the two countries.

Still, Castillo conceded that Guatemala could improve the scope of its weapons training and better equip the police.

“No national police leave the academy without being able to handle techniques of arrest and firearms well,” he told Reuters.