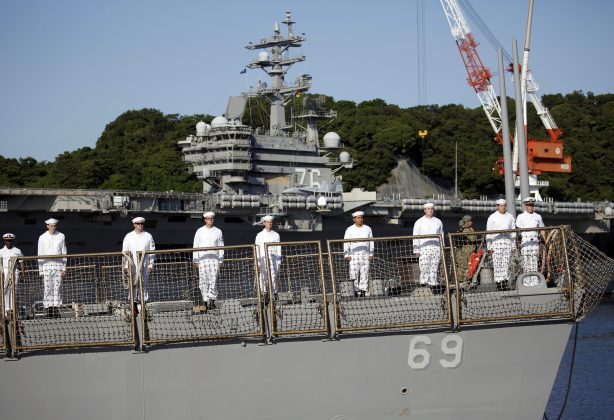 YOKOSUKA, Japan (Reuters) – The USS Milius, one of the U.S. Navy’s most advanced guided missile destroyers, arrived in Japan on Tuesday to reinforce defenses against any ballistic missile attacks by North Korea, or anyone else in East Asia.

The warship’s arrival at Yokosuka Naval Base comes three weeks before an unprecedented meeting is supposed to take place in Singapore between U.S. President Donald Trump and North Korean leader Kim Jong Un. 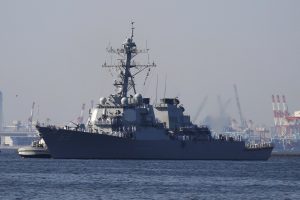 The show of force is a reminder of the military pressure that can be brought to bear on North Korea as the United States seeks to press it to abandon its nuclear weapons and its ballistic missile program.

The deployment of the Milius to Japan was delayed by almost a year so it could undergo upgrades to its Aegis air defense system to enhance its ability to detect and target missiles.

Armed with missiles designed to shoot down warheads in space, the Milius will be part of a naval destroyer force that would be the first U.S. line of defense against any long-range ballistic missiles fired at it by North Korea.

The force, under a security treaty between Japan and the United States, would also defend Japan from attack.

“What the Milius has now is the latest and greatest upgrade for the combat system,” Commander Jennifer Pontius, the ship’s captain, said in Yokosuka after her ship docked.

The Milius’s dockside welcome under a bright afternoon sky in Yokosuka, the headquarters of the U.S. Seventh Fleet, came amid uncertainty over whether the Trump-Kim meeting will go ahead.

North Korea said last week it was reconsidering the summit after calling off separate talks with South Korea in a protest over U.S.-South Korean air combat drills known as Max Thunder.

North Korea said it would walk away from dialogue if the United States insisted on it unilaterally abandoning its nuclear arsenal, which it says it needs to defend itself against U.S. aggression. 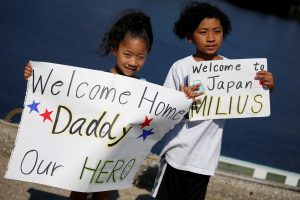 Family members of a crew hold signs, upon the arrival the U.S. guided-missile destroyer USS Milius (DDG69), that joins Forward Deployed Naval Forces at the U.S. naval base in Yokosuka, Japan May 22, 2018. REUTERS/Issei Kato

Trump has warned that failure to reach a denuclearisation agreement could lead to “decimation” of Kim’s rule.

The Milius joins two other ships in the Seventh Fleet with similar upgrades and reinforces the fleet after two other U.S. warships in the region were crippled in collisions with commercial ships last year.

With the Milius, the U.S. Navy has 13 ships based at Yokosuka, including the USS Ronald Reagan, Washington’s only forward deployed carrier.