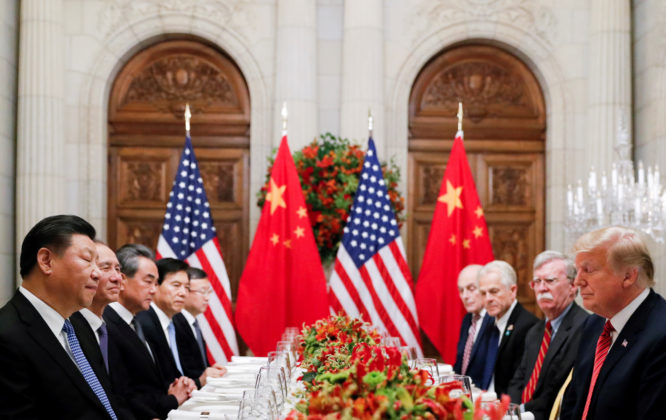 WASHINGTON (Reuters) – U.S. President Donald Trump and Chinese Vice Premier Liu He will sign an initial trade deal on Wednesday that will roll back some tariffs and see China boost purchases of U.S. goods and services, defusing an 18-month conflict between the world’s two largest economies.

Liu said the two sides will work more closely together to obtain tangible results and achieve a win-win relationship despite differences in their political and economic models, China’s official Xinhua news agency reported on Wednesday.

U.S. officials called the deal a huge win that marked a significant shift in Washington’s relations with China, but said it included a tough enforcement measure that could trigger renewed tariffs if Beijing does not live up to its promises.

Some analysts and economists have questioned whether the outcome of the drawn-out talks justified that economic pain.

Trump and Liu, who led the Chinese side in the trade talks with Washington, are scheduled to sign the 86-page Phase 1 deal at a White House event at 11:30 a.m. EST (1630 GMT) before over 200 invited guests from business, government and diplomatic circles.

It is not clear at this time whether the entire document will be released on Wednesday.

Trump, who entered the White House in 2017 vowing to rebalance global trade in favor of the United States, has already begun touting the deal as a pillar in his 2020 re-election campaign, calling it “a big beautiful monster” at a rally in Toledo, Ohio last week.

The centerpiece of the deal is a pledge by China to purchase an additional $200 billion worth of U.S. farm products and other goods and services over two years. That will help reduce the bilateral U.S. trade deficit in goods, which peaked at $420 billion in 2018. The United States had a small services trade surplus with China of $40.5 billion in 2018.

Kudlow said the deal called for China to buy an additional $75 billion worth of U.S. manufactured goods over the two-year period. A source told Reuters this week that would include aircraft, autos and car parts, agricultural machinery and medical devices.

Beijing will boost energy purchases by some $50 billion and services by $40 billion, mostly in the financial sector, Kudlow said.

The Reuters source said agricultural purchases will get a $32 billion lift over the two years, compared to a 2017 baseline of U.S. exports to China.

When combined with the $24 billion in 2017 farm exports, the $16 billion annual increase approaches Trump’s goal of $40 billion to $50 billion in annual agricultural sales to China.

China will significantly increase imports of U.S. soybeans after the Phase 1 deal is signed, the Global Times reported on Wednesday, citing comments from a senior Chinese economist at a state think tank.

Wang Liaowei, senior economist at the China National Grain and Oils Information Center, which is under the National Food and Strategic Reserves Administration, also told the paper that imports of U.S. products such as pork and cotton could also see a jump.

Although the deal could be a big boost to farmers, planemaker Boeing <BA.N>, U.S. automakers and heavy equipment manufacturers, some analysts question https://af.reuters.com/article/commoditiesNews/idAFL4N29J26S China’s ability to divert imports from other trading partners to the United States.

“I find a radical shift in Chinese spending unlikely. I have low expectations for meeting stated goals,” said Jim Paulsen, chief investment strategist at Leuthold Group in Minneapolis. “But I do think the whole negotiation has moved the football forward for both the U.S. and China.”

The Phase 1 deal, reached in December, canceled planned U.S. tariffs on Chinese-made cellphones, toys and laptop computers and halved the tariff rate to 7.5% on about $120 billion worth of other Chinese goods, including flat panel televisions, Bluetooth headphones and footwear.

But it will leave in place 25% tariffs on a vast, $250 billion array of Chinese industrial goods and components used by U.S. manufacturers.

U.S. Treasury Secretary Steven Mnuchin told CNBC on Wednesday the deal would boost the U.S. economy, and that Washington could lower tariffs as part of a Phase 2 agreement that would address complex issues such as cybersecurity.

Mnuchin said the U.S. relationship with China was complicated and Washington would continue to raise humanitarian and national security concerns with Beijing in separate discussions. “You have to negotiate different pieces at different times,” he said.

He said Chinese telecom equipment maker Huawei Technologies Co Ltd was not a “chess piece” in the economic negotiations.

Evidence is mounting that tariffs have raised input costs for U.S. manufacturers, eroding their competitiveness.

Diesel engine maker Cummins Inc <CMI.N> said on Tuesday that the deal will leave it paying $150 million in tariffs for engines and castings that it produces in China.

The company issued a tepid statement of approval on Tuesday: “We believe this is a positive step and remain optimistic that all parties will remain at the table in order to create a pathway to eliminate all of the instituted tariffs.”

Lighthizer and Mnuchin insisted there were no side agreements to remove more tariffs after the November U.S. elections. Mnuchin on Wednesday reiterated that Trump could consider easing tariffs if the two countries move quickly to seal a Phase 2 follow-up agreement.

The Phase 1 deal includes pledges by China to forbid the forced transfer of American technology to Chinese firms as well as to increase protections for U.S. intellectual property.

But it stops well short of addressing the core U.S. complaints about China’s trade and intellectual property practices that prompted the Trump administration to pressure Beijing for changes in early 2017.

The deal contains no provisions to rein in rampant subsidies for state-owned enterprises, which the administration blames for excess capacity in steel and aluminum and says threaten industries from aircraft to semiconductors.

China has agreed in the Phase 1 deal to open its financial services sector more widely to U.S. firms, and to refrain from deliberately pushing down its currency to gain a trade advantage, the latter prompting Treasury to drop its currency manipulator label on Beijing.