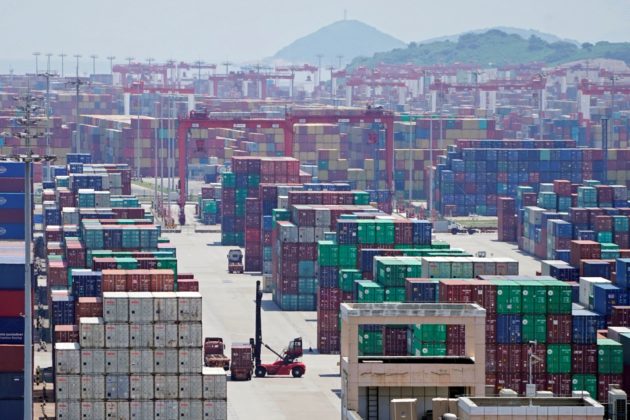 WASHINGTON/BEIJING (Reuters) – The United States and China are close to agreement on the first phase of a trade deal, White House adviser Kellyanne Conway said on Tuesday, after top negotiators from the two countries spoke by telephone and agreed to keep working on remaining issues.

They discussed core issues related to the phase one deal, the ministry said.

Completion of a phase one deal had been expected in November, but trade experts and people close to the White House said last week it could slide into the new year, as Beijing presses for more extensive tariff rollbacks and Washington counters with its own demands.

Conway told Fox News the United States and China were nearing agreement on the preliminary deal.

“We’re getting really close and that first phase is significant,” she said, adding that Trump wanted to “do this in phases, in interim pieces because it’s such a large, historic trade deal.”

Senate Finance Committee Chairman Chuck Grassley, an Iowa Republican, told reporters on Tuesday, an initial trade deal with China could be reached before the end of the year.

He said China had invited Lighthizer and Mnuchnin to visit Beijing for in-person talks and they were willing to go if they saw “a real chance of getting a final agreement.”

The U.S. trade representative and the Treasury did not respond to requests for comment. A source familiar with the trade talks said the U.S. officials could go to Beijing after the Thanksgiving holiday on Thursday.

In October, Trump said he expected to quickly dive into a second phase of talks once “phase one” had been completed, focusing on U.S. complaints that China effectively steals U.S. intellectual property by forcing U.S. firms to transfer their technology to Chinese rivals.

U.S. and Chinese officials, lawmakers and trade experts warn such follow-on negotiations may prove difficult given the November 2020 U.S. presidential election, the difficulties in getting the first-stage done, and the White House’s reluctance to work with other countries to pressure Beijing.

“We continue to negotiate,” Conway said. “But those forced tech transfers, the theft of intellectual property, the trade imbalance of a half a trillion a year with the world’s second largest economy, China – this makes no sense to people.

“But the president wants a deal. But President Trump always waits for the best deal,” she said.

Tuesday’s call took place amid heightened tensions on various fronts between Beijing and Washington, with China saying on Tuesday that it had summoned U.S. Ambassador Terry Branstad on Monday to protest the passage in the U.S. Congress of the Hong Kong Human Rights and Democracy Act.