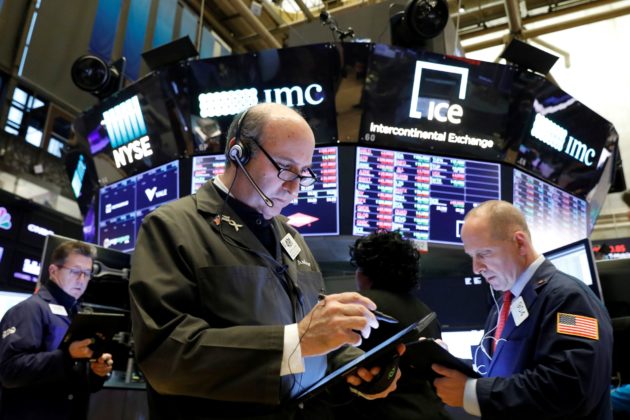 Walt Disney Co was the top boost to the Dow Jones with a 1.8% rise, after a report its streaming service was averaging nearly a million new subscribers a day. The stock also propped up the benchmark S&P 500.

Rising hopes of a U.S.-China trade truce, upbeat domestic economic data and a third-quarter corporate earnings season that has largely topped lowered expectations have put the market back on an upward track after a torrid summer.

“They keep talking about the ‘phase one’ deal being done possibly soon, but every day is sort of a ping pong back-and-forth of will they or won’t they,” said Everett Millman, precious metals expert with Gainesville Coins in Tampa, Florida.

A third interest rate cut by the Federal Reserve this year has also played a role in boosting risk appetite, and Fed Chair Jerome Powell said on Monday monetary policy was “well positioned” to support the strong labor market.

However, doubts over the strength of the U.S. consumer linger and data on Tuesday showed the Conference Board’s U.S. consumer confidence index missed analysts’ projections.

Best Buy Co Inc  jumped 7.4% as it forecast strong holiday-quarter earnings, while discount store operator Dollar Tree Inc tumbled 15% after the company projected holiday-quarter profit below expectations, signaling the fallout from the trade dispute. The stock was the biggest on the S&P and the Nasdaq.

The S&P index recorded 25 new 52-week highs and no new lows, while the Nasdaq recorded 78 new highs and 35 new lows.

(Reporting by Arjun Panchadar and Manas Mishra in Bengaluru; Editing by Sriraj Kalluvila)