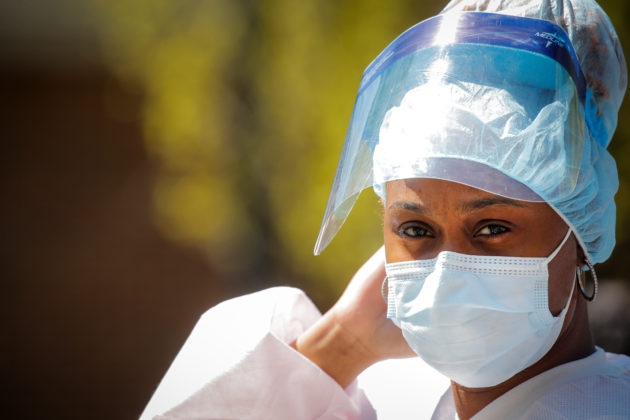 A healthcare worker is seen outside the Brooklyn Hospital Center, during the outbreak of coronavirus disease (COVID-19) in the Brooklyn borough of New York City, New York, U.S., April 28, 2020. REUTERS/Brendan McDermid

By Lisa Shumaker(Reuters) – U.S. deaths from the novel coronavirus topped 60,000 on Wednesday and the outbreak will soon be deadlier than any flu season since 1967, according to a Reuters tally.

America’s worst flu season in recent years was in 2017-2018 when more than 61,000 people died, according to the U.S. Centers for Disease Control and Prevention.

The United States has the world’s highest coronavirus death toll and a daily average of 2,000 people died in April of the highly contagious respiratory illness COVID-19, according to a Reuters tally. The first U.S. death was recorded on Feb. 29 but recent testing in California indicates the first death might have been on Feb. 6, with the virus circulating weeks earlier than previously thought.

On Tuesday, COVID-19 deaths in the United States eclipsed in a few months the 58,220 Americans killed during 16 years of U.S. military involvement during the Vietnam War. Cases topped 1 million.

The actual number of cases is thought to be higher, with state public health officials cautioning that shortages of trained workers and materials have limited testing capacity.

The outbreak could take nearly 73,000 U.S. lives by Aug. 4, compared with an April 22 forecast of over 67,600, according to the University of Washington’s predictive model , often cited by White House officials.

In early March, the prospect that the coronavirus would kill more Americans than the flu was unthinkable to many politicians who played down the risk of the new virus.

Republican President Donald Trump tweeted on March 9: “So last year 37,000 Americans died from the common Flu. It averages between 27,000 and 70,000 per year. Nothing is shut down, life & the economy go on. At this moment there are 546 confirmed cases of CoronaVirus, with 22 deaths. Think about that!”

On March 11, Democratic New York City Mayor Bill de Blasio told New Yorkers during a radio interview to eat out at restaurants if they were not sick.

There is as yet no treatment or vaccine for coronavirus while flu vaccines are widely available along with treatments.